< Myanmar's Aung San Suu Kyi Faces New Charge From Military Government
Update Required To play the media you will need to either update your browser to a recent version or update your Flash plugin.
By Susan Shand
16 February 2021


Police in Myanmar brought a new charge against detained, former leader Aung San Suu Kyi, her lawyer said Tuesday. The move might mean that she could be held without limitation or trial.

Military officials who removed Aung San Suu Kyi from office and seized power on February 1 appear to be increasing their crackdown on the opposition.

Aung San Suu Kyi was first charged with illegally owning communications equipment called walkie-talkies. Military officials used the charge to detain her. The new charge accuses her of violating coronavirus restrictions, her lawyer told reporters. He met earlier with a judge in a court in the capital, Naypyitaw. The lawyer also said he has not seen her since her arrest. 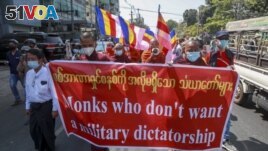 The charge can lead to three years in prison. But, because of changes to the law introduced by the military last week, she could be detained without limitation or agreement from the court.

The move comes over two weeks after the military took power in a coup that surprised many. The international community had been hopeful that Myanmar was moving toward democracy. Since the takeover, the military has increased efforts to stop protests, including blocking the internet and reacting to demonstrations with violence.

On Monday, security forces pointed guns at a group of 1,000 demonstrators in the city of Mandalay. Local reporters said the police also shot rubber bullets into a crowd, injuring a few people.

Protests continued Tuesday in Yangon, the country's largest city. Police blocked off the street in front of the Central Bank. Protestors targeted the bank because of the belief that the military wants to remove money from it.

Buddhist monks demonstrated outside the Yangon United Nations office. Around 3,000 demonstrators, mainly students, returned to the streets of Mandalay Tuesday. They carried posters of Aung San Suu Kyi and demanded a return to democracy. The protests are continuing even though there is an order banning groups of more than five people.

The Global New Light of Myanmar is a state-owned newspaper. It reported about a meeting of the State Administration Council, which is the new military government. It also reported that new leader Senior General Min Aung Hlaing said officials "are handling the ongoing problems with care."

On Sunday and Monday nights, the military ordered a block on the internet, as it had done before. It has also prepared a new law that would make many online activities illegal, but is not yet in effect. There is widespread belief that the government is building a firewall system of internet control to permit it to watch or block online activity.

The takeover began on February 1, when the military stopped Parliament from taking their seats. Members of Suu Kyi's party formed a committee, declaring themselves the true representatives of Myanmar's people and asking for international support.

Neighboring China has not denounced the military's actions however. Some protesters have accused China of helping the military leaders. China is Myanmar's main weapons supplier.

On its Facebook page, the Chinese embassy's ambassador to Myanmar, Chen Hai, said his country has good relations with both Aung San Suu Kyi's party and the military. He said accusations that China was helping Myanmar's military block the internet were untrue. He also called accusations that Chinese soldiers were on Myanmar's streets "ridiculous."

The Associated Press reported on this story. Susan Shand adapted it for Learning English. Mario Ritter, Jr. was the editor.

crackdown – n. a serious attempt to punish people for doing something that is not permitted, often by military or law enforcement officials

coup – n. a sudden attempt by a small group of people, often military members, to seize and takeover the government of a country often involving violence