< 'The Murders in the Rue Morgue,' by Edgar Allan Poe, Part One
Update Required To play the media you will need to either update your browser to a recent version or update your Flash plugin.
By VOA
09 April 2021


We present the first of five parts of the short story "The Murders in the Rue Morgue," by Edgar Allen Poe. The story was originally adapted and recorded by VOA Learning English.

Paris! It was in Paris during the summer of 1840. There and then, I met a strange and interesting young man named August Dupin. Dupin was the last member of a well-known family, a family which had once been rich and famous. August Dupin, however, was far from rich. 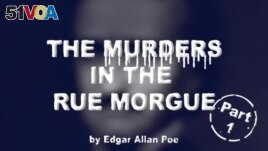 The Murders in the Rue Morgue by Edgar Allan Poe, Part One

He cared little about money. He had enough to buy necessities — and a few books. That was all. Just books. With books, he was happy.

In fact, we first met in an old bookstore. A few more chance meetings at such stores followed. Soon, we began to talk.

I was deeply interested in the family history he told me. I was surprised, too, at how much and how widely he had read; more important, the force of his busy mind was like a bright light in my soul. I felt that the friendship of such a man would be, for me, riches without price.

So, I told him how I felt and asked him to come and live with me.

He would enjoy using my many fine books. And I would have the pleasure of company, for I was not happy alone.

We passed the days reading, writing and talking. But Dupin was a lover of the night. So, often, we walked the streets of Paris after dark.

I soon noticed that Dupin had a special way of understanding people. Using it gave him great pleasure. He told me once, with a soft laugh, that he could see through the windows that most men have over their hearts. He could look into their souls.

Then, he surprised me by telling what he knew about my own soul. He knew things about me that I had thought only I could possibly know. At these times, he acted cold and emotionally distant. His eyes looked empty and far away. His voice became high and nervous.

At such times it seemed to me that I saw not just Dupin, but two Dupins — one who coldly put things together, and another who just as coldly took them apart.

One night we were walking down one of Paris's long, dirty streets. We were quiet, both busy in our own thoughts.

But, suddenly Dupin spoke: "You're right," he said. "He is a very little fellow, that's true, and he would be more successful if he acted in lighter, less serious plays."

At first I saw nothing strange in this. Dupin had agreed with me. This, of course, seemed to me quite natural. A few moments passed. Then it hit me. Dupin had not agreed with something I had said. He had agreed directly with my thoughts. I had not spoken a word!

Dupin had read my mind. I stopped walking.

Here, I stopped speaking. If he really had heard my thoughts, he would have to prove it.

"That is indeed what I was thinking. But, tell me, in Heaven's name, how did you know?"

"It was the fruit-seller," Dupin answered.

"I mean the man who bumped into you as we entered this street. Maybe fifteen minutes ago."

"Oh, yes...I remember, now. A fruit-seller, with a large basket of apples, bumped into me. But what does that have to do with you knowing I was thinking of Chantilly?"

"As we turned onto this street the fruit-seller bumped you. You stepped on some uneven cobblestones. I could see that it hurt your foot.

"You spoke a few angry words to yourself, and continued walking. But you kept looking at the cobblestones in the street, so I knew you were thinking of them.

"Then we came to a small street where they are putting down new street stones. Here your face became brighter. You were looking at these more even stones. And your lips moved. I was sure they formed the word stereotomy, which is the name for how these new stones are cut. Stereotomy takes a large block and divides it evenly into smaller pieces. You will remember that we read about it in the newspaper only yesterday.

"I thought that the word stereotomy must make you think of the old Greek writer and thinker Epicurus. His ideas are also about dividing objects into smaller and smaller pieces called atoms. He argued that the world and everything else are made of these atoms.

"You and I were talking about Epicurus and his ideas, his atoms, recently. We were talking about how much those old ideas are like today's scientific study of the planets and stars. So, I felt sure that, now, as we walked, you would look up to the sky. And you did.

"I looked also at the sky. I saw that the group of stars we call Orion is very bright and clear tonight.

"I knew you would notice this and that you would think about the name Orion.

"Now, keep listening carefully. Only yesterday, in the newspaper, there was a report about the actor Chantilly. The critic did not praise him. And he used a Latin saying that had also been used to describe Orion. So I knew you would put together the two ideas of Orion and Chantilly.

"I saw you smile, remembering the article and the mean words in it.

"Then, I saw you straighten up, as tall as you could make yourself. I was sure you were thinking of Chantilly's size, and especially his height. He is small; he is short. And so I spoke, saying that he is indeed a very little man, this Chantilly, and he would be more successful if he acted in lighter, less serious plays."

I cannot say I was surprised by what Dupin had just reported. My reaction was much bigger than just surprise. I was astonished.

Dupin was right, as right as he could be. Those were in fact my thoughts, my unspoken thoughts, as my mind moved from one thought to the next.

But if I was astonished by this, I would soon be more than astonished. One morning this strangely interesting man showed me once again his unusual reasoning power. We heard that an old woman had been killed by unknown persons. The killer, or the killers, had cut her head off — and escaped into the night. Who was this killer, this murderer? The police had no answer. They had looked everywhere and found nothing that helped them. They did not know what to do next. And so — they did nothing. But not Dupin. He knew what to do.

Now it's your turn to use the words in this story. Do you or any of your friends or family have strong mental abilities? How are those mental abilities expressed? Let us know in the comments section or on 51VOA.COM.

nervous – adj. having or showing feelings of being worried and afraid about what might happen

Heaven – n. the place where God lives and where good people go after they die, according to some religions

bump(ed) – v. to move into or against someone or something in a sudden and forceful way

stage actor – term. a person who acts in a theater play

cobblestone(s) – n. a round stone used in paving streets

block – n. a solid piece of material that has flat sides and is usually square or rectangular in shape

astonish(ed) – v. to cause a feeling of great wonder or surprise in someone