< 'The Murders in the Rue Morgue,' by Edgar Allen Poe, Part Five
Update Required To play the media you will need to either update your browser to a recent version or update your Flash plugin.
By VOA
07 May 2021


We present the last of five parts of the short story "The Murders in the Rue Morgue," by Edgar Allen Poe. The story was originally adapted and recorded by the VOA Learning English.

I was stunned. August Dupin, my friend with the extraordinarily sharp mind and observational powers still had surprises for me!

He had uncovered so much about the horrifying Rue Morgue murders that it seemed there was more understanding than mystery left. But still the major question remained: Who? 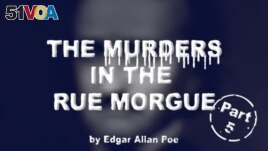 The Murders in the Rue Morgue by Edgar Allan Poe, Part Five

Dupin had invited someone to our home...someone he believed knew the answer to that question. As we awaited his arrival, my friend began to put together other pieces of evidence from the crime.

"We add for our consideration the condition of the room. So we have: a strength more than human; a wildness less than human; a murder without reason; horror beyond human understanding; and, finally, a voice without a recognizable language."

A cold feeling went up and down my back. "A madman, Dupin! Someone who has lost his mind. Only a madman could have done these murders!"

Dupin smiled a little. "Ah, but madmen come from one country or another, don't they. Their cries may be terrible, but they are made of words, and some of the words can be understood. Let me help with one more clue. Look at this hair. I took it from the fingers of the old woman. Is this the hair of a madman?"

Dupin handed me the evidence. I could not believe what I was looking at or the feel of it in my hands.

The marks left by the killer's hands were enormous. My fingers seemed like twigs in comparison.

"Dupin! These marks were made by no human hand!"

"No. They were not. I am guessing they are from the hand of an orangutan. The size, strength and wildness of these apes is well known.

"And the hair and strange sounds would complete the solution of killer animal, as well. Yet, I still do not understand the second voice. We know it was a French speaking man. His only words were ‘Mon Dieu.' Who spoke, Dupin?"

"Upon those two words I have placed my hopes of finding a full solution to the crime. The ‘My God' was an expression of horror. It seems improbable that the speaker of those words helped the orangutan. Could instead he be its owner? Maybe the animal escaped from him, and he followed it to the house on the Rue Morgue. I assume that the man would not have been able to recapture it."

"Is that who we are waiting for now, Dupin, the Frenchman? How did you reach him?"

Dupin smiled when he answered.

"I put an ad in the newspaper. Read it yourself."

I took the newspaper. Caught — Early in the morning of the seventh of this month: a very large orangutan. The owner, who is known to be a sailor, may have the animal again if he can prove it is his.

"But, Dupin. How can you know that the man is a sailor?"

"I do not know it. I simply suspect. A sailor could go up that pole on the side of the house. Sailors travel to faraway lands where one might find an orangutan. And it would be valuable. The sailor would want it back so..."

"Finally, Dupin, we will learn the whole truth."

Slowly the door opened, and there, before us, stood a sailor!

He spoke in French. "Bonsoir."

"Good evening to you too, my friend. I suppose you have come to ask about the orangutan?"

"A shame, I wish I could keep it. It is very valuable, I guess.

"Well, I want it back...of course, I will pay you for your trouble to find it and keep it. What is your price?"

"Well...that is very fair, indeed, but it is not money I want, sir. My price is truth. Tell me everything you know about the murders in the Rue Morgue."

The sailor's face reddened deeply. He jumped to his feet. For a moment, he stood and stared. But then he fell back into his chair, trembling. His face grew pale. His eyes closed. And he said not a word.

"My friend, you must not be afraid. We are not going to hurt you. I know very well that you yourself are not the killer. But it is true that you know something about him — or about it. You've done nothing wrong. You didn't even take any of the money. You have no reason to be afraid to talk and to tell the truth. It is a matter of honor for you to tell all you know.

"So help me God! I...I'll tell you all I know. About a year ago our ship sailed to the Far East, to the island of Borneo. The forest there, the jungle, was thick with trees and other plants, and hot and wet and dark. My friend and I wanted to explore the strange place. So we did. There we saw the orangutan and caught it. And it returned with us to the ship. My friend died on the passage home. So, the animal became mine alone. I was keeping it in a cage in my house, here in Paris. I planned to sell it very soon. One night I came home and it was...it was loose. It had got free, I don't know how. It held a knife in its hands. It did not know of its dangers, of course. It was playing with it. As soon as the animal saw me it jumped up and ran from the house. I followed. It ran several blocks and turned a corner. When I made the same turn, the animal was out of sight. I looked far down the street and saw nothing. Then, I heard a noise above me. There was the beast, climbing a pole up the side of a house. It was maybe two meters up. I also went up the pole. As I am a sailor it was easy for me. When the animal was close to the top I saw him jump through an open window. I got to the same place but could not make the jump. I could see into the room, however, through another window, which was closed.

"The two women were sitting there, looking at papers from a box on the floor. The animal, knife still in hand made a noise and the old woman turned. That is when I heard the first of those terrible cries. I watched with horror as the animal attacked. Soon the two were dead and the room was a disaster. The orangutan then pushed the young woman's body up the chimney. It picked up the other victim, then, and moved toward the window. I realized what was coming and I fled. Down the pipe, I scrambled. At the bottom I heard the old woman's body hit the ground. I ran. I didn't look back. I ran! Oh, mon Dieu, mon Dieu!"

The police in Paris could not charge the sailor. His only wrongdoing was silence which is not a criminal offense, the police chief said.

However, the official did have a problem with Dupin. He was angry that Dupin and not a member of his force had solved the mystery. He said people should mind their own business.

"Let him complain. He'll feel better for it. And maybe learn something. Perhaps, he will never again say ‘Not possible!' about that which, somehow, must be possible."

Now it's your turn to use the words in this story. Have you ever thought you knew the solution to a difficult or complex problem, but the solution was something far different than what you expected? What was that experience like? Let us know in the comments section or on our 51VOA.COM.
_____

stun(ned) – v. to surprise or upset someone very much

madman – n. a man who has severe mental illness

hand(ed) – v. to give something to someone using your hands

neck – n. the part of the body between the head and shoulders

orangutan – n. a large ape that has very long arms and reddish-brown hair

ape – n. a type of animal (such as a chimpanzee or gorilla) that is closely related to monkeys and humans and that is covered in hair and has no tail or a very short tail

redden(ed) – v. to make something red or to become red

stare(d) – v. to look at someone or something for a long time often with your eyes wide open

pale – adj. having a skin color that is closer to white than is usual or normal

cage – n. a box made of wire or metal bars in which people keep animals or birds

loose – adj. (informal) – having escaped, such as an animal from a cage

corner – n. the place where two streets or roads meet

beast – n. a wild animal that is large, dangerous, or unusual

scramble(d) – v. to move or climb over something quickly especially while also using your hands

mind (their) own business – expression. do not be so interested in what other people are doing. (The word "their" can be replaced with other personal pronouns, depending on the situation.)

complain – v. to say or write that you are unhappy, sick, uncomfortable, or that you do not like something