< More Women Lead Atlantic City Gambling Operations
Update Required To play the media you will need to either update your browser to a recent version or update your Flash plugin.
By Susan Shand
04 October 2020


For many years, women have served alcohol to gamblers in casinos, but they rarely supervised the whole operation.

Women now run four of Atlantic City's nine casinos. Some industry officials say that could be the future of the gambling industry.

The gambling business Caesars Entertainment hired Jacqueline Grace last week to run the Tropicana casino as its senior vice president and general manager. She is one of two Black women running casinos in Atlantic City. She joins Melonie Johnson, who took over leadership of the Borgata this year as its president. 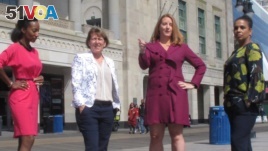 The four women who run Atlantic City casinos pose for photos on the Atlantic City N.J. Boardwalk on Sept. 21, 2020: From left, to right they are: Jacqueline Grace of Tropicana; Terry Glebocki of Ocean Casino Resort; Karie Hall of Bally's, and Melonie John of Borgata. (AP Photo)

"I hope I live to see the day where this is not considered news," Johnson said. She added: "it's probably going to be another 10 years before we get all the inequity out of the workforce."

The American Gaming Association is the national trade group for the casino industry. It does not keep information about how many U.S. casinos are run by women. Several casino officials and experts, however, say Atlantic City has more woman-led casinos than any other area of the country.

The women agreed that the number was far less than the number of men who hold those jobs. Several estimated it was about 10 percent.

"I think it speaks to the...changes in the gaming industry, which was traditionally very male-oriented, over the past few years," said David Schwartz. He is a gambling historian with the University of Nevada, Las Vegas.

He explained that women were not permitted to deal cards in Nevada casinos until the 1970s, so they had a late start in the industry.

Debra Nutton was one of the first craps dealers in Las Vegas at the old Sands hotel. At the time, her male bosses were not happy and often insulted her. She was so successful, however, that she became a manager. Nutton later became a senior vice president at the Wynn and MGM casino companies.

"When women have a seat at the table...the more opportunities we will get," she said.

New Jersey began legal casino gambling in 1978. It opened up new possibilities for women, said Virginia McDowell. She is vice president of Global Gaming Women, which supports women in the gambling industry.

"I can think of at least a dozen women trained in Atlantic City who went on to lead very significant careers in the industry," said McDowell. She served as executive vice president of the Trump casinos in Atlantic City, and CEO of Missouri-based Isle of Capri casinos.

Grace of the Tropicana said it is not a surprise that nearly 50 percent of Atlantic City casinos are run by women. She said the businesses are "being thoughtful about a workforce that looks like their communities."

Hall, the Bally's general manager in Atlantic City, said she is looking to the future.

"This is a progression," she said. "We want to keep it moving forward."

gambler– n. one who plays games of chance and bets money on cards, sports and other games

casino– n.a place for gamblers to play and bet

inequity– n. the state of opportunities being available to some but not others

deal cards– v.to give playing cards to gamblers during a game

oriented –adj. related to a certain kind of person, aimed at a kind of individual or group

opportunity– n.a chance or conditions that are favorable