< More US States Launching COVID-19 Warning Apps
Update Required To play the media you will need to either update your browser to a recent version or update your Flash plugin.
By Bryan Lynn
07 October 2020


A growing number of American states are launching smartphone systems designed to warn people of possible exposure to COVID-19.

The release of the apps comes as parts of the United States continue to struggle with the spread of COVID-19 and after President Trump announced that he had become infected.

States and local communities set their own restrictions and guidelines for citizens to follow to reduce spread of the virus. The federal government did not build a nationwide app, so states have worked with developers to create their own.

The tool could be a big help to health officials trying to deal with a fast-spreading disease that many people do not even know they have. Many infected individuals show few or no signs of sickness. If a person learns they were near someone who later got infected, they could immediately isolate or seek treatment.

The apps are based on technology developed by Google and Apple. They use Bluetooth wireless signals to permit devices near each other to exchange information. A record of the exchange is created. Users who become infected can share the information to warn others who were near them about possible infection.

U.S. states have used this technology to develop their apps. But it is too early to know how effective the systems will be in fighting the spread of COVID-19.

Jeffrey Kahn is director of the Johns Hopkins Berman Institute of Bioethics, a medical research organization in Baltimore, Maryland. When asked to give his opinion on such apps, he told VOA the success of such systems remains unknown.

"That's part of what's both interesting and frustrating about where we are," Kahn said. He added that since the technology is unproven and the systems are being launched in the middle of a public health emergency, "there's a lot of learning as we go." 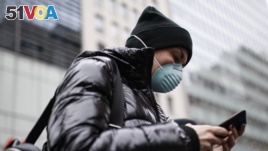 In this file photo, a pedestrian uses her phone while wearing a face mask in Herald Square, Thursday, March 12, 2020, in New York. (AP Photo/John Minchillo)

One of the main barriers to making the apps a success in other places has been a low usage rate among the public. In Europe, several countries launched apps in recent months. But, few people downloaded them. Officials in some nations say the low usage rates make the technology ineffective.

Virginia became the first U.S. state to launch an app in early August. As of October 1, officials said about 576,000 Virginians had downloaded the app, called COVIDWISE. The Richmond Times-Dispatch reported that number of downloads represented about 7 percent of the state's population.

As of October 1, just 238 people had used the app to report they had become infected. But more than 50,000 Virginians have tested positive for COVID-19 since the app launched, the report said.

State officials said the app was advertised in a public campaign and they were not sure why more people had not downloaded it. The officials noted Virginia's app includes strong privacy protections. An explanation of the COVIDWISE app states that "no location data or personal information" is ever collected, stored or sent to state health officials or technology companies.

Google and Apple made it a condition of using their technology that COVID-19 apps developed by states could not use any phone location data.

That privacy requirement helps build people's trust in the apps, said Sarah Kreps, a professor at New York's Cornell University. She has studied how technology is being used to fight COVID-19.

"In order for these apps to be effective, you need to have enough of a critical mass of people who are willing to download and use the app," Kreps said. Public trust has to be established in nations where the government does not require such apps, she added.

So far, 11 U.S. states have issued COVID-19 warning apps based on the Apple-Google technology, a review by 9to5 Mac found.

In its latest mobile software version, Apple included a tool called Exposure Notification, which makes it easier for state officials to notify people who have been exposed. Users can turn it on or off. Google is expected to add the tool to Android devices soon.

Individual apps have not been built to work across state lines. But the technology website Vox reports that some states – including New Jersey, New York, Pennsylvania and Delaware – have teamed up to form regional partnerships by adding code to link the apps.

Michelle Quinn reported on this story for VOA News. Bryan Lynn adapted the report for Learning English, with additional information from The Associated Press, Reuters and online sources. Ashley Thompson was the editor.

isolate – v. to separate from other people or things

positive – adj. in a medical test, positive means the person being tested has a disease or condition

location – n. a place or position

notify – v. to tell someone officially about something

regional – adj. relating to or coming from a particular area