< More Questions for Schools as COVID-19 Cases Rise
Update Required To play the media you will need to either update your browser to a recent version or update your Flash plugin.
By Dan Novak
04 January 2022


As schools open after the holiday vacation, school officials must again decide whether to keep students away.

The Omicron version of the coronavirus is spreading quickly. Cases in the United States have doubled in a short period.

In December, President Joe Biden announced renewed efforts to get more Americans vaccinated and to get booster shots. In addition, he announced expanded COVID-19 testing partly paid for by the government. However, he also urged schools to remain open. Biden said more vaccines are available to children and there is federal support for schools. 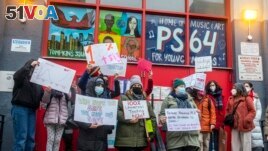 Teachers from the Earth School speak out on issues related to lack of coronavirus testing outside P.S. 64, Dec. 21, 2021, in New York. (AP Photo/Brittainy Newman, File)

"Last year, we thought the only way to keep children safe was to close their schools," Biden said. "Today we know more and we have the tools to keep schools open."

But schools are still closing. Burbio is a company that tracks school closures in the U.S. As of Monday afternoon, it found 2,753 schools that have closed or changed to in-person classes this week. When the Delta variant was spreading in late August, 792 schools closed to in-person classes.

Monday, the U.S. Food and Drug Administration approved the Pfizer booster shot for children as young as 12. The U.S. Centers for Disease Control and Prevention (CDC) said 13.5 million 12 to 17-year-olds have received two Pfizer shots. That is just over half of children in that age group.

Hospitalizations among children, who have been vaccinated at lower rates, are also rising. But early research suggests that Omicron is a less severe version of the disease. A third shot of vaccine, the booster shot, also appears to be effective at fighting off the new version of the coronavirus.

The CDC and Department of Education Secretary Miguel Cardona support "test-to-stay" policies for schools. Such a policy calls for students to remain in school after they come in contact with a student with the virus if tests show they are not infected. Some schools have required students to quarantine for several days before returning to class.

"This is welcome news to principals, who are dealing with lengthy and disruptive quarantines," said the National Association of Elementary School Principals in a statement about the CDC guidelines. "Even as the pandemic continues to pose new challenges, we must remain laser-focused on ensuring students are attending in-person schooling when it is safe to do so."

But some school districts were not prepared for the increase in coronavirus cases.

Detroit schools in Michigan are closed this week through Wednesday to test all school workers for the virus. But students will not be attending online classes because some students do not have computers, district superintendent Nikolai Vitti said in a written statement.

Closing schools will give them a chance "to have as much of a COVID free working environment as possible while possibly preparing students for a laptop distribution process" during the end of the week.

Chicago is the country's third-largest school district. Officials there announced the purchase of 100,000 laptop computers over the holidays in case they are needed for learning at home in January. District leaders said they hope to avoid closing all schools in the area. The Chicago Teachers Union supports temporarily halting in-person learning. It also supports new safety measures, like COVID-19 tests showing students are not infected before they can return to school.

In Florida's Miami-Dade County, testing has shown that one in four people have been infected with the coronavirus. The school system announced Thursday that all school workers must wear face coverings at school. Students are strongly encouraged to wear them. A state law prevents school districts from requiring face coverings for students.

Cardona wrote in a message to districts that 99 percent of schools were open in-person in December, compared with 46 percent last January.

"The goal remains to keep all schools open for in-person learning five days a week throughout the 2021-22 school year and beyond," he said.

Dan Novak wrote this story for VOA Learning English with additional reporting from The Associated Press and Education Week.

Booster shot — n. an extra amount of a substance (called a vaccine) that is injected with a needle into a person or animal to help protect against a particular disease

track — v. to follow and observe, especially in an effort to find evidence

isolation — n. the state of being in a place or situation that is separate from others

quarantine — n. the period of time during which a person or animal that has a disease or that might have a disease is kept away from others to prevent the disease from spreading

principal — n the person in charge of a public school

disruptive — adj. preventing things from carrying on in a normal way

district — n. an area established by a government for official government business

distribute — v. to give or to send to people; to give out

encourage — v. to make someone more likely to do some action