< More Job Seekers Have Interviews with Computers
Update Required To play the media you will need to either update your browser to a recent version or update your Flash plugin.
By Bryan Lynn
23 June 2021


Online services that use computers to interview job seekers were increasingly used by companies during the coronavirus health crisis. But the technology raises questions about whether a machine can correctly or fairly judge a person's personality and reactions in front of a camera.

Dana Anthony is one job seeker who has experienced such interviews. One was for a part-time job at Target last year. The day after the interview, she got an email informing her that she was not chosen.

Speaking to The Associated Press, Anthony said she did not know why she was removed from consideration so quickly. She had no sense of how the interview had gone. She said this is because she received no human feedback during the process.

Her rejection email from Target stated: "We're unable to provide specific feedback regarding your candidacy." Anthony was rejected for another job in December after completing another online interview.

One interview system is run by a business called HireVue, one of the leading companies in the field. In the past, the Utah-based HireVue used artificial intelligence (AI) methods to judge a job-seeker's personality and job skills. It did this by observing the expressions on a person's face during the interview.

But after facing intense criticism about the scientific effectiveness of its claims and the possibility of unfairness, HireVue announced earlier this year that it would stop using that method. However, the company's AI-based system still considers speech and word choices when rating a candidate's personality and skills.

HireVue helped create a market for "on-demand" video interviews. Companies using the services include stores Target and Ikea, technology companies like Amazon, and banks like JP Morgan and Goldman Sachs. Companies in the oil and travel industries, and even school systems, have used them.

The Associated Press (AP) spoke to several employers which use the technology, but most did not want to discuss it.

HireVue chief Kevin Parker told the AP that his company makes sure its technology will not discriminate based on things like race, gender or a person's speaking accents. He said its systems, which turn speech into text to make decisions about job skills, can perform better than human interviewers. 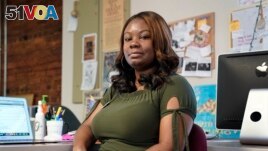 "What we're trying to replace is people's gut instinct," Parker said during a video interview.

HireVue said it interviewed more than 5.6 million people around the world in 2020. Supermarket companies used it to make decisions about thousands of job-seekers every day as demand for workers rose during the pandemic.

Other services such as Modern Hire and Outmatch have started offering their own video interviews and AI tools. On its website, Outmatch says it aims to measure "the must-have soft skills your candidates and employees need to succeed."

HireVue noted that most of the companies it works with do not actually use the company's AI-based recommendations. Atlanta's school district, for example, has used HireVue since 2014, but says it depends on 50 human recruiters to rate recorded interviews.

Target said the pandemic led it to replace in-person interviews with HireVue interviews. But it told the AP that it uses its own employees — not HireVue's AI methods — to watch and make decisions about recorded videos.

But none of that was clear to Anthony when she sat down in front of her computer to complete the interviews. "I understand companies or organizations trying to be more mindful of the time and the finances they spend when it comes to recruitment," she said.

But Anthony, who holds a master's degree in communications, said the interviews left her uneasy about who, or what, was judging her.

The Associated Press reported on this story. Bryan Lynn adapted the report for VOA Learning English. Mario Ritter, Jr. was the editor.

interview – n. a meeting in which someone asks you questions to see if you are suitable for a job or course

personality – n. the set of emotional qualities, ways of behaving, etc., that makes a person different from other people

feedback –n. helpful information or criticism that is given to someone to say what can be done to improve a performance or product

accent – n. the way in which someone pronounces words, influenced by the country of area they come from

gender –n. the state of being male or female

gut instinct – n. a way of behaving, thinking, or feeling that is not learned

recruiter – n. a person who persuades people to work for a company or become new members of an organization