< More Information about Little-Known Venus
Update Required To play the media you will need to either update your browser to a recent version or update your Flash plugin.
By Anna Matteo
14 May 2021

Recently, scientists gathered data about Venus by bouncing radio waves off the planet. The study measured the tilt of the Venusian axis and size of the planet's center, or core. It also studied the planet turning.

All this data is giving a deeper understanding of the strange planet, sometimes called Earth's "evil twin." 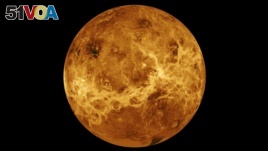 Data from NASA's Magellan spacecraft and Pioneer Venus Orbiter is used in an undated composite image of the planet Venus. (NASA/JPL-Caltech/Handout via REUTERS)

It was already known that Venus has the longest day. The time the planet takes for one full turn, or rotation, on its axis is longer than any other planet in our solar system. However, some earlier estimates were not completely correct.

The study found that a single Venusian rotation takes about 243 Earth days. That means a day on Venus lasts longer than a year on Earth. Scientists also say that Venus makes a complete orbit around the sun in 225 Earth days.

The researchers sent radio waves toward Venus 21 times from 2006 to 2020 from NASA's Goldstone Antenna in the Mojave Desert of California. Then they studied the radio echo, the sound that traveled back to two places on Earth: Goldstone and at the Green Bank Observatory in West Virginia.

Jean-Luc Margot is a planetary astronomy professor at the University of California, Los Angles. He led the study. The findings were published online by Nature Astronomy.

He said the radio waves lit up Venus with a huge "flashlight." The scientists then observed the reflections as they came back to Earth.

Margot praised Venus as an excellent "laboratory" for understanding how planets are formed and how they change.

"There are likely billions of Venus-like planets in the galaxy," he said.

The new data showed that the Venusian planetary core is about 7,000 kilometers (4,360 miles) across. That is similar in size to the Earth's core. Earlier estimates of Venus's core were based on computer modeling rather than observational data. Its core is very likely made of iron and nickel. However, Margot said that it is unclear whether the core is solid or liquid.

Venus, the second planet from the sun, is similar in structure but slightly smaller than Earth. The planet is about 12,000 kilometers wide.

Its poisonous atmosphere is mainly made up of carbon dioxide, with clouds of sulfuric acid. This creates a greenhouse effect. So, its surface temperatures can reach 471 degrees Celsius. That is hot enough to melt lead.

Venus turns on its axis almost upright. This means it lacks separate seasons. The Earth has more of a tilt. The study found that the Venusian tilt is about 2.64 degrees. Earth's is about 23.5 degrees.

Venus turns from east to west. This is the opposite direction from all other planets in our solar system except Uranus.

Here is another strange thing about Venus: the time between sunrises (as opposed to the length of a single axial turn) takes 117 Earth days. This is because Venus rotates in the direction opposite of its orbit around the sun.

Venus has received less attention than Mars, Earth's other planetary next-door neighbor, and other places in the solar system. Margot said this extreme lack of data about Venus has led to an extreme lack of understanding.

"There have been no NASA missions to Venus in almost 30 years and about a dozen NASA missions to Mars in this time ...," Margot said. He added that the new findings on how Venus turns could help any future landing attempts.

Will Dunham reported this story for Reuters. Anna Matteo adapted it for VOA Learning English. Caty Weaver was the editor.

data – n. facts about something that can be used in calculating, reasoning, or planning

tilt – v. to move or shift so as to slant or tip

axis – n. the imaginary straight line that something (such as the Earth) turns around

spin – v. to turn or cause someone or something to turn around repeatedly

rotation – n. the action or process of rotating on or as if on an axis or center

reflection – n. an image that is seen in a mirror or on a shiny surface

galaxy – n. any of the very large groups of stars and associated matter that are found throughout the universe

diameter – n. mathematics : the length of a straight line through the center of an object or space

greenhouse effect – n. warming of the lower atmosphere of the earth that occurs when radiation from the sun is absorbed by the earth and then given off again and absorbed by carbon dioxide and water vapor in the atmosphere gases