< More Americans on Special Diets for Health Reasons
Update Required To play the media you will need to either update your browser to a recent version or update your Flash plugin.
By John Russell
09 November 2020


More Americans say they are on a special diet compared with Americans about 10 years ago. That information comes from a report released this week by the U.S. Centers for Disease Control and Prevention, or CDC.

The increased dieting comes at a time when obesity levels continue to rise. The CDC report found that 17 percent of Americans said they were on diets in 2017-2018 — up from 14 percent about 10 years earlier. Over the same period, obesity levels increased in the U.S. to 42 percent — up from 34 percent. 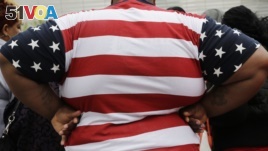 FILE - In this May 8, 2014, file photo, an overweight person is seen in New York. As obesity rates climb in the U.S., more Americans say they're following special diets compared to a decade ago. (AP Photo/Mark Lennihan, File)

Dana Hunnes is a professor of public health and nutrition at the University of California, Los Angeles. Hunnes said that the number of Americans who said that they are on a diet is lower than expected. This is because diet-related diseases are very common in the country.

The report noted that about half of American adults have diet-related health problems, such as diabetes and heart disease. Overall, more women reported being on a diet than men.

The heavier and more educated people were, the more likely they were to report being on a special diet, the study found.

Between 2007 and 2008, and 2017 and 2018, diets described as "weight loss or low calorie" grew in popularity. Low-carbohydrate diets became more popular, while low-fat and low-cholesterol diets became less popular.

The findings were part of an ongoing national survey. People who took part in the survey were asked the following question: "Are you currently on any kind of diet, either to lose weight or for some other health-related reason?"

Becky Ramsing is a dietician and program officer at Johns Hopkins Center for a Livable Future. Ramsing said that people make very different kinds of choices in the hopes of losing weight. In some cases, she said people might not understand why the choices they make do not help them lose weight.

"They won't eat bread, but then they'll go eat a lot of other things that are higher in calories," she said.

Ramsing added that many American diet trends ban some foods. But to make lasting changes, she said people should consider their eating overall. That will help them deal with another problem of diets, she noted. Diets are hard to continue doing over time.

The Associated Press reported this story. John Russell adapted it for Learning English. Mario Ritter, Jr. was the editor.

carbohydrate – n. any one of various substances found in certain foods (such as bread, rice, and potatoes) that provide your body with heat and energy and are made of carbon, hydrogen, and oxygen

cholesterol – n. a substance that is found in the bodies of people and animals

survey – n. an activity in which many people are asked a question or a series of questions in order to gather information about what most people do or think about something

dietician – n. a person whose job is to give people advice about what to eat in order to be healthy

trend – n. something that is currently popular or fashionable