< Millions More Girls Miss School During the Pandemic
Update Required To play the media you will need to either update your browser to a recent version or update your Flash plugin.
By Alice Bryant
25 May 2021


In many parts of the world, attending school can be a daily struggle for children, especially girls.

A long list of barriers prevents their attendance. Parents may not be able to pay school fees or buy books or other supplies. Ideas about gender can also play a part in the problem. Some families that need help at home expect girls to perform such work. And, with schools far way in many communities, there is also a safety issue for girls.

Before the COVID-19 health crisis, it is estimated that around 132 million girls were out of school worldwide. That number comes from the United Nations Educational Scientific and Cultural Organization. After the coronavirus spread, with schools in many nations closed, millions more girls were missing their studies at home. They are taking on additional household duties and caring for young and sick family members. In addition, research suggests an increase in unwanted marriages and violence against girls, especially at home, during the pandemic. 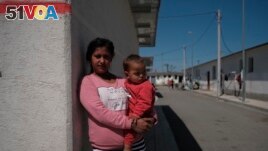 FILE - Xhensila Bukri in Albania, from the Worth of a Girl child marriage video project

Christina Kwauk is a girls' education expert with the Brookings Institution, a research organization in Washington, D.C. She told VOA that the worldwide economic crisis caused by COVID-19 has led to a girls' education crisis, or what she called a gender inequality crisis. For example, stay-at-home orders have reduced girls' ability to leave their homes. But Kwauk said being at home has not made girls safer. There is a huge increase in gender-based violence, often sexual violence, she said:

"COVID, on its own, while it disrupted the lives of everyone around the world, it created so many more vulnerabilities for girls especially – girls and women especially."

A report by the educational organization Room to Read talks about a 15-year-old girl named Varuni in Sri Lanka. She takes part in the Girls' Education Program there. With schools closed, she was at home more and faced violence from her alcoholic father. Varuni told Room to Read that her father also does not respect her right to an education. The organization then asked local leaders to persuade the father to let Varuni live with another family member while schools were closed. Now she is now learning again, the group wrote.

The same report by Room to Read explained that 42 percent of the 24,000 girls they spoke to said their household had lost wages during the pandemic. And the financial effects of COVID-19 are a huge risk to a girl's education.

While schools have remained closed, many adolescent girls are not learning at home because of pressure from their parents to take on more home duties. That means far less or no time to study at home. The Overseas Development Institute reports that, especially in rural areas, most girls are not able to learn over the radio, television or internet. Families lack devices and electricity and have no money to pay phone or internet costs. But even in places where access is a little better, often boys are given access before girls due to gender norms.

A report from Plan International says the COVID-19 pandemic has also sharply increased acts of gender-based violence in the home. Around the world, 243 million women and girls between the ages of 15-49 have experienced sexual or physical violence from a romantic partner over the last 12 months. Many experts are calling the increase in such violence during the COVID-19 pandemic a "shadow pandemic."

Historically, economic crises lead to more child marriage as well as early and forced marriages, and the coronavirus crisis is no exception. In Indonesia, for example, the group Plan International found that 24,000 applications for child marriage were submitted between January and June 2020. That is a more than 250 percent increase in applications since 2012. In 2020, girls in southern Asia were affected most by the risk of increased child marriage, followed by West and Central Africa, then Latin America and the Caribbean.

During times of economic or environmental shock, families may choose harmful gender customs for survival, Kwauk says. That can include giving a girl child away for marriage to receive a dowry, or payment.

"[It] is the hard decision that a family has to make, but if that means potentially more economic security for a daughter, that's one way to decrease some of that pressure and then also provide a little bit more resources for the household that's already suffering from a loss of livelihood or loss of income."

For girls, early marriage can lead to pregnancy or joining the workforce. That means they are even less likely to return to school.

World Bank numbers show that several countries in Asia, Africa, Latin America and the Middle East saw major increases in girls' enrollment in school in recent years. But these gains are now threatened by the COVID-19 pandemic. Economic suffering from poverty combined with harmful gender practices may lead to some girls never being able to return to school.

Some studies predict that 11 million to 20 million girls will not return to schools when they reopen as they have been forced to become adults too soon.

Even for girls who do return, Kwauk says, learning loss during the pandemic may discourage the girls from staying in school. And that is something not discussed enough, she notes.

Alice Bryant wrote this story for Learning English. Mario Ritter was the editor.

fee – n. an amount of money that must be paid

gender – n. the state of being male or female

disrupt – v. to cause something to be unable to continue in the normal way

adolescent – adj. a word describing a young person who is developing into an adult

shadow – n. a dark shape that appears on a surface when someone or something moves between the surface and a source of light

application – n. a formal and usually written or typed request for something

potentially – adv. in a way that makes it possible for something to happen or exist in the future

enrollment – n. the process of arranging to attend a school and specific classes

discourage – v. to make someone less determined, hopeful or confident