< Military Rulers in Myanmar Ban Gatherings as Protests Continue
Update Required To play the media you will need to either update your browser to a recent version or update your Flash plugin.
By Bryan Lynn
08 February 2021


Myanmar's military rulers on Monday ordered a curfew and banned gatherings in the country's two largest cities. The move follows days of protests against the military overthrow of the government last week.

The first government orders covered Yangon and Mandalay, but measures for other parts of the country were also expected.

Gatherings of more than five people were banned, along with motorized processions. Curfews were set from 8 p.m. to 4 a.m. The military said the measures were ordered to stop unlawful actions.

On Monday, police fired a water cannon at demonstrators in the capital, Naypyitaw. Protests were also reported Monday in Yangon, Myanmar's largest city, as well as Mandalay and other places. 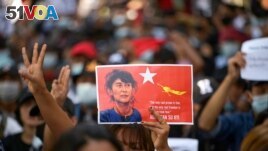 People rally in a protest against the military coup and to demand the release of elected leader Aung San Suu Kyi, in Yangon, Myanmar, February 8, 2021. (REUTERS/Stringer)

The protesters are demanding that the military return power to the democratically elected government.

"We do not want the military junta," said Daw Moe, a protester in Yangon. "We never ever wanted this junta. Nobody wants it. All the people are ready to fight them."

The military seized power on February 1, the day newly elected lawmakers were supposed to take their seats in Parliament. The generals said they acted because of wrongdoing in the November election. They accused the country's ousted leader, Aung San Suu Kyi, of not investigating election wrongdoing. Myanmar's election commission has dismissed both claims.

The military declared a one-year state of emergency after it seized power. Suu Kyi has been restricted to her home since being removed from office.

State media reported on the protests for the first time Monday and claimed the demonstrations were endangering the country's security.

"Democracy can be destroyed if there is no discipline," said a Ministry of Information statement read on state television station MRTV. "We will have to take legal actions to prevent acts that are violating state stability, public safety and the rule of law."

The country's new military leader, General Min Aung Hlaing, said in a televised speech that his government planned to hold new elections and hand over power to the winner. He added that the military was prepared to form a "true and disciplined democracy" that would be different from past periods of military rule.

Myanmar's history includes a long and bloody struggle for democracy.

On Sunday, tens of thousands of protesters gathered at Yangon's Sule Pagoda, the center of past public uprisings against military rule in 1988 and 2007. The military used deadly force against demonstrators to end both of those uprisings.

Suu Kyi's party has asked for international recognition as the rightful representative of the people.

The Assistance Association for Political Prisoners is a human rights organization based in neighboring Thailand. The group says that at least 165 people, mostly politicians, have been detained in Myanmar since last week's military overthrow.

The Associated Press and Reuters reported on this story. Bryan Lynn adapted the reports for Learning English. Caty Weaver was the editor.

procession – n. a line of people or vehicles that moves forward slowly as part of a ceremony or public event

junta – n. a military government that has taken power in a country by force

stability – n. the quality of not being likely to change or move

discipline – n. the control of a person's behavior using rules and punishments