< Migrants Seeking to Cross Southern US Border Face Dangerous Heat
Update Required To play the media you will need to either update your browser to a recent version or update your Flash plugin.
By Dan Novak
02 August 2021


Record numbers of migrants and extreme heat are resulting in many deaths among immigrants trying to cross the southern U.S. border.

The nonprofit group Humane Borders says that in June, the remains of 43 people were found in Arizona's Sonoran Desert. The desert is just north of the U.S. border with Mexico.

The group follows the recovery of bodies in one area along the 3,145-kilometer border. It studies data from local coroner's offices to find out how many migrants have died.

Brad Jones is a volunteer with Humane Borders. He said, "What is happening is climate change is real, and the temperatures have been getting hotter and the weather itself is more volatile."

The group said there has been an increase in the number of migrants trying to cross the border in the remote western desert. Migrants cannot get emergency aid there.

The National Weather Service reported that June was the hottest month on record in the Phoenix and Tucson areas of Arizona. Temperatures often reached 43 degrees Celsius. 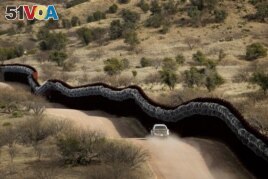 FILE - A Customs and Border Control agent patrols on the U.S. side of a razor-wire-covered border wall along Mexico east of Nogales, Ariz., March 2, 2019.

Jones said the number of migrant deaths in June was sad but not unusual.

"There's been a migrant death crisis on our border right at your doorstep for 20 years. And in the Arizona-Mexico borderlands itself, nearly 4,000 people have lost their lives over the last 20 years," he said.

A U.S. Customs and Border Protection, CBP, spokesperson said that the land and desert climate along the border is extreme. The official said that people thinking of crossing the border are putting their own lives in danger.

"CBP's message for anyone who is thinking of entering the United States illegally along the Southern border is simple: don't do it," the spokesperson wrote in an email to VOA.

There have always been dangers in the border area. Drowning, for example, is a danger in the Rio Grande River. But researchers have seen a rise in migrant deaths caused by heat.

Sam Chambers is a scientist at The University of Arizona's Binational Migration Institute. He said heat is to blame for most migrant deaths recorded by the Pima County medical examiner's office in Arizona.

Chambers said U.S. border enforcement has caused migrants to walk through more dangerous and remote areas of the Sonoran Desert. He said people are unlikely to have enough water, even in cooler areas of the border. "They have perspired all the water and they can only carry so much," he said.

Chambers' research suggests that migrants who died were mostly male and usually between 20 and 49 years old. About 80 percent were from Mexico.

Humanitarian groups working along the border believe more migrants have died than have been reported. They say some bodies have never been found.

Border Angels is a nonprofit group in San Diego, California, that supports more than 15 shelters in Tijuana, Mexico. It estimates that over the past 27 years, more than 11,000 migrants have died in their attempt to cross the southern border.

Border Angels operates what is called a water drop program. For 20 years, volunteers have been leaving water along desert trails used by migrants entering the country illegally.

Humane Borders has its own water program. Jones said it can be dangerous giving out water because there are several groups that try to stop supplies from being given to migrants.

Looking at data for bodies found in the month of June, Jones said most died within the last 30 days.

"These are real, living, breathing people who in May were alive and, by the end of June, were not alive anymore," he said.

Aline Barros reported this story for Voice of America. Dan Novak adapted it for VOA Learning English. Mario Ritter, Jr. was the editor.

coroner — n. a public official whose job is to find out the cause of death when people die in ways that are not natural

volatile — adj. likely to change in an extreme or sudden way

remote — adj. far away from other people, houses, cities or civilization

perspire —v. to produce a clear liquid from your skin when you are hot or nervous; sweat