< Mexico Experts Find 2,000 Ruin Sites near Maya Train Route
Update Required To play the media you will need to either update your browser to a recent version or update your Flash plugin.
By Susan Shand
17 October 2020


Experts in Mexico said Wednesday they have found more than 2,000 pre-Hispanic ruins along the proposed path of the president's "Maya Train" project on the Yucatan peninsula.

Scientists discovered the ruins using LiDAR elevation mapping technology. LiDAR involves shooting a laser at the ground through heavy vegetation to get a detailed image of the surface.

The discovery could slow down the train project, which has already caused arguments and protests in the area. Critics of the project say it threatens indigenous communities and water supplies. 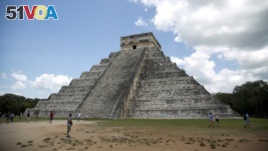 The information from the mapping technology showed a total of 2,187 "archeological monuments" along 366 kilometers of the planned path. That covers about 25 percent of the total train route. Experts already knew about the existence of some of the ruins, but some are new.

The Maya had a large number of city-states throughout Yucatan and Central America between 2,000 B.C. and A.D. 900. Their ancestors still live on the peninsula and across Central America.

The term "monument" can mean many things, such as a pre-Hispanic Maya home, or the remains of a religious building.

Mexico's National Institute of Anthropology and History said at least 91 of the discovered ruins were large structures like plazas, or temple bases. Maya houses were generally small wooden structures with stone bases that were easily destroyed.

The institute said in a statement that the builders of the train route would have to take "measures" to avoid damaging the ruins. It did not say whether that meant parts of the route will have to be replanned.

In July, Mexican President Andrés Manuel López Obrador opened the building of the "Maya Train," his own special project. It is expected to run about 1,500 kilometers around Yucatan.

The train will connect Caribbean hotels to areas far from the beaches that have archeological ruins. The train will have 15 stations to bring visitors and – hopefully -- economic growth to the mostly poor area.

The government says it will cost as much as $6.8 billion, but others say it could cost much more.

Critics say there was not enough study of the effects the train project will have on the environment and archeological ruins.

Some Maya communities have taken legal steps to stop the project, arguing that it will cause environmental damage.

peninsula – n. a piece of land that juts out into the ocean

elevation – n. a place that is high above

indigenous – adj. the original people who lived in a place

monument – n. an edifice built by humans to mark an event or memory

route - n. the path a vehicle takes to get to its destination

temple – n. a place of worship