< Mental Health Gets Spotlight at Olympics
Update Required To play the media you will need to either update your browser to a recent version or update your Flash plugin.
By Dan Friedell
28 July 2021


American Simone Biles is widely considered to be the greatest gymnast of all time. In the United States, she is the "face" of the Tokyo 2020 Olympics. When the games began, she was expected to win five gold medals.

But on Tuesday, she pulled out of the team final. She made the choice after having trouble landing her vault in the competition's first round. She later said her mind was not in the right place to let her safely perform the difficult moves she is known for. In other words, her mind was not letting her body do what it needed to do.

Cameras caught her telling her trainers Tuesday during the team final, "I just don't trust myself."

So, she made the decision to protect her mental health and, she said, to give her teammates a better chance at earning a medal. Biles' three teammates went on to place second behind the gymnasts representing the Russian Olympic Committee.

Biles is not the only Olympian in recent months to talk about the pressure and mental effects of competing at the highest level. 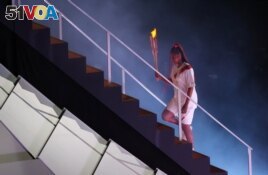 Japanese tennis star Naomi Osaka decided not to compete at the French Open earlier this summer. She made that choice after French Open organizers were critical of her decision to not speak to the media during the event. She made that decision, she said at the time, to protect her mental heath.

This week, Osaka lost in the second round of Olympic competition. She said she felt extreme pressure to win for Japan, where the Olympics are taking place.

Many Olympic athletes have discussed the stress they have felt from the pandemic. COVID-19 has greatly changed the way the Games are being held.

Liz Cambage is a top basketball player for Australia. She left her team one week before the start of the Games because she was worried about entering the Olympic "bubble" in Tokyo without the support of her friends and family.

Biles, who competed in the 2016 Games in Brazil, said the Tokyo Olympics are very different from past Olympics. This time, the American gymnastics team is not staying in the Olympic Village. The team is in a hotel, away from other people. Talking about the daily life in this Olympics, she said "there are no outlets." In other words, there is little else for her to do than think about gymnastics.

Earlier this week, Biles wrote on Instagram that she felt like she had the "weight of the world" on her shoulders.

On Wednesday, Biles announced she was pulling out of her next big event, the individual all-around, to "focus on her mental health."

The IOC, or International Olympic Committee, said it is paying more attention to the mental health of athletes. A spokesman said, "Are we doing enough? I hope so. I think so."

The IOC said it has websites and phone numbers athletes can call if they need help with a mental health problem.

Naoko Imoto is a Japanese swimmer who competed at the 1996 Olympics. She has been working with the Tokyo Olympic Committee. She said that when Naomi Osaka talked about her mental health in May, it presented a chance to have a more open discussion about problems athletes face, especially in Japan.

"In Japan, we still don't talk about mental health," Imoto said. "I don't think there's enough of an understanding on mental health, but I think there are a lot of athletes coming out right now and saying it is common."

Dan Friedell adapted this story for Learning English based on reports by Reuters and The Associated Press. Ashley Thompson was the editor.

What would you tell Simone Biles or Naomi Osaka? Tell us in the Comments Section and visit 51VOA.COM.

gymnast –n. a person who perform exercises on a flat area or with equipment as part of a sports competition that is judged

athlete –n. a person who is trained in or good at sports, games, or exercises that require physical skill and strength

pandemic –n. an occurrence in which a disease spreads very quickly and affects a large number of people over a wide area or throughout the world

stress –n. a state of mental tension and worry caused by problems in your life, work, etc.

bubble – n. a group of people who stay apart from other people in order to stop the spread of disease in a pandemic

outlet – n. something that people use to express their emotions or talents, in this case activities different than normal day-to-day tasks