< Memorial Day and Grammar
Update Required To play the media you will need to either update your browser to a recent version or update your Flash plugin.
By John Russell
27 May 2021


Memorial Day is an American holiday that honors the memory of people who died while serving in the U.S. military. This year, it will be celebrated on Monday, May 31st.

You might read or hear about Memorial Day ceremonies in the United States. The American president, for example, often gives a speech.

In today's Everyday Grammar, we will explore the connection between Memorial Day, grammar, and speeches. 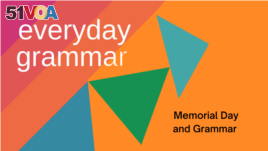 It might sound strange to you, but ceremonies can teach you a lot about the English language – particularly verbs and adjectives.

Simple verbs, the present, and time

Let's start our report with part of a speech given by former President Ronald Reagan in 1984.

Reagan uses terms such as recall, which means to remember, and words such as valor, meaning bravery or courage.

My fellow Americans: Memorial Day is a day of ceremonies and speeches. Throughout America today, we honor the dead of our wars. We recall their valor and their sacrifices. We remember they gave their lives so that others might live.

These verbs are all in the simple form.

English has several verb forms. The simple and the progressive are two of them. English speakers are more likely to use the simple form than the progressive form – particularly in speaking.

Specifically, Reagan used what is called the simple present – the simple form of the verb in the present.

But the so-called simple present does not always line up exactly with the present time.

Reagan uses the simple present to describe something that is generally true about Memorial Day. He is not exactly talking about only the present moment in time.

This idea is somewhat difficult. And it raises an important issue: English verb forms, sometimes called "tenses" in grammar books, do not always cleanly line up with exact points in time.

Adjective use – great vs. noble

Another Memorial Day speech, given in 1914 by former President Woodrow Wilson, can teach us about some of the language choices American presidents often make when giving speeches.

Wilson suggested that Americans are sometimes known to be careless in their choice of words. He added, "yet it is interesting to note that there are some words about which we are very careful."

Many other American presidents have been careful in using "noble" in their Memorial Day speeches as well.

For example, Reagan, in the same 1984 speech from earlier in this report, said the following:

A grateful nation opens her heart today in gratitude for their sacrifice, for their courage, and for their noble service.

Although today's report discussed American presidents, speeches, and language choices, you can use the general ideas in many different situations.

For example, think of a ceremony or remembrance in your own country. Think about what kinds of verbs and adjectives speakers of your language use in that situation. Then compare your own language to the kinds of choices that English speakers might make.

And although the idea of Memorial Day is serious, you can use some of the ideas you learned today to talk about fun, light-hearted celebrations. Think of how to use the simple present to talk about activities that usually take place on that day. And think about specific adjectives that are correct for the event.

courage – n. the ability to do something without being afraid

progressive – n. grammar: a verb tense that is used to refer to an action or a state that is continuing to happen &#9674; A progressive verb form in English consists of a form of the verb "be" followed by the main verb's present participle.

noble – adj. having, showing, or coming from personal qualities that people admire (such as honesty, generosity, courage, etc.)

grateful – adj. feeling or showing thanks to someone for some helpful act

gratitude – n. a feeling of appreciation or thanks