< Mekong River Drops to ‘Worrying’ Levels
Update Required To play the media you will need to either update your browser to a recent version or update your Flash plugin.
By Bryan Lynn
16 February 2021


An intergovernmental organization says water levels in the Mekong River have dropped to "worrying levels" since the start of 2021.

The drop was partly caused by a restriction on flows from a hydropower plant in China's Yunnan province, the Mekong River Commission (MRC) said in a recent statement. The MRC includes Cambodia, Laos, Thailand and Vietnam. 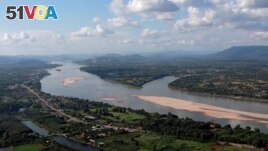 This file photo shows a view of the Mekong river bordering Thailand and Laos, seen from the Thai side in Nong Khai, Thailand, October 29, 2019. (REUTERS/Soe Zeya Tun/File Photo)

The important waterway has turned blue along the Thai-Laos border – from its usual cloudy brown color – signaling lower water and reduced levels of sediment. Lower levels of sediment could be the result of outflow restrictions from China's Jinghong hydropower station, the organization said.

The statement said other reasons for the drop were lower rainfall, flow changes upstream and hydropower operations in Mekong tributaries.

"There have been sudden rises and falls in water levels immediately downstream of Jinghong and further down to Vientiane," said Winai Wongpimool. He is the director of the MRC's Technical Support Division.

Such changes can affect fish migration, agriculture and transportation that nearly 70 million people depend on for financial support and food security.

The MRC said normal conditions could return if large amounts of water are released from Chinese dams.

China's Ministry of Foreign Affairs disputed the organization's findings and said there are many causes of downstream drought.

Last year, China promised to share data from its dam projects with MRC member countries. In January, Chinese officials informed neighbors that its dams were filling reservoirs until January 25.

However, levels dropped again in February and were 800 cubic meters per second as of February 11, the MRC said.

China said the dam's outflow has continually been more than 1,000 cubic meters per second since the end of January. It said that level is nearly two times more than the natural flow of the river. It called on the MRC "to avoid causing public misunderstanding."

Reuters reported on this story. Bryan Lynn adapted the report for Learning English. Ashley Thompson was the editor.

sediment – n. materials that collect at the bottom of a liquid

hydropower – n. the production of electricity by the force of fast moving water

upstream – adv. along a river in the opposite direction of the way the water is mo\ving

tributary – n. a stream feeding a larger stream or a lake

manage – v. to have control of something, such as a business, department, sports team, etc.

drought – n. a period of extended dryness caused by a lack of rain

reservoir – n. a place where a liquid is stored