< Mealworms Now Sold as Food in EU
Update Required To play the media you will need to either update your browser to a recent version or update your Flash plugin.
By Anna Matteo
16 May 2021


People across Europe many soon be able to buy dried yellow mealworms in food stores and in restaurants.

Earlier this month, the European Union's 27 nations approved a proposal to put Tenebrio molitor beetle larva on the market as a "novel food." 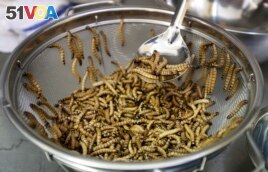 Mealworms are cleaned and sorted before being cooked at restaurant in San Francisco, California, Feb. 18, 2015. (AP Photo)

The move came after the European Food Safety Agency (EFSA) ruled the insect safe to eat.

Researchers described the mealworm as a protein-rich food. They said the larva can be eaten whole or crushed into small pieces for mixing with other foods.

People with allergies to dust or shellfish -- such as crab, lobster, or clams -- may also be allergic to mealworms, the European Commission said.

Insects as food represent a very small market. However, EU officials said raising them for food could be good for the environment.

Following the approval by EU states, a EU regulation authorizing dried yellow mealworms as a food will be coming soon.

Staff writers for the Associated Press reported this story. Anna Matteo adapted it for VOA Learning English. Caty Weaver was the editor.

larva – n. a very young form of an insect that looks like a worm

novel – adj. new and not resembling something formerly known or used

crustacean – n. technical : a type of animal (such as a crab or lobster) that has several pairs of legs and a body made up of sections that are covered in a hard outer shell

market – n. the available supply of or potential demand for specified goods or services