< Many Cities Unprepared for Intense Heat Waves, Experts Say
Update Required To play the media you will need to either update your browser to a recent version or update your Flash plugin.
By Dan Novak
30 July 2021


Many places in the northern half of the world are currently facing record-breaking heat.

Several weeks ago, there was a record-breaking heat wave in the Pacific Northwest of the United States and western Canada. Oregon and Washington state reported almost 200 heat-related deaths.

Jennifer Vanos is an assistant professor at Arizona State University. She said: "(Heat) is different than other extremes because...it's invisible." She added that when "it's something people have never experienced before, then it becomes a lot more dangerous."

A United Nations group on climate change says cities can be dangerous places during heat waves. City buildings and streets can make temperatures rise. And with more than 50 percent of the world's population living in cities, experts fear that heat-related health problems will become more common. 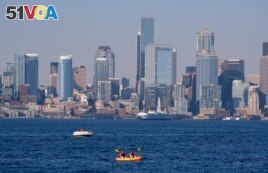 Kayakers and boaters ply the waters of Elliott Bay with the Seattle skyline behind during a heat wave hitting the Pacific Northwest, Sunday, June 27, 2021. (AP Photo/John Froschauer)

Cities can be several degrees hotter than rural environments. This effect is known as the urban heat island.

Hashem Akbari studies urban heat islands at Concordia University in Montreal. He said building materials in cities take in heat and hold it. Asphalt, for example, is a petroleum-based mixture used in streets and on the tops of buildings. Its dark surface reflects little light and absorbs heat.

At the same time, buildings are often close together, which means there are fewer trees and plants. Plants provide valuable cover from the sun. Plants also absorb water through their roots and use surrounding heat to evaporate the water from their leaves. With fewer plants, this natural cooling effect is gone, Akbari said.

To avoid the heat, people living in cities use electricity to power air cooling systems and fans. On a very hot day, those technologies use a lot of electricity.

Sayanti Mukherjee is an assistant engineering professor at the University at Buffalo, New York. She said cities have "a higher population to serve, so the infrastructure is working at a higher capacity because of the demand."

But sometimes the electricity system is unable to supply enough power to meet the demand. If that happens, the system shuts down and the power shuts off.

Extreme weather events, however, are unusual. That makes it difficult for city planners and engineers to prepare for conditions that might not happen very often.

The materials used to make urban infrastructure also are affected by high heat.

Heat makes metal materials expand. Power lines, for example, are usually made with metal. Hot temperatures and high electricity demands cause the metal to expand and fall lower to the ground. The falling lines can touch trees or people and can cause fires or injuries.

Concrete and asphalt expand with heat too. Quick changes in temperature can create cracks in concrete and can cause buildings, streets or bridges to weaken.

Researchers are looking for ways to help urban populations live through extreme heat.

Vanos said cities should keep better records of heat-related deaths. She said these kinds of deaths are often underreported. Vanos added that city governments can help identify populations that are at risk and improve emergency services.

Akbari said more trees and grass are needed to cool cities. He added that structures should be built with new materials that are lighter in color and reflect more light. That would also lower temperatures and save energy.

Experts say the heat-trapping carbon gasses have pushed the world's climate to an extreme.

"The more frequent and intense heat waves are showing that we need to prepare ourselves more to address this problem in the future," Mukherjee said.

Luyi Cheng reported this story for Voice of America. Dan Novak adapted it for VOA Learning English. Mario Ritter, Jr. was the editor.

reflect — v. to move in one direction, hit a surface, and then quickly move in a different and usually opposite direction

evaporate — v. to change from a liquid into a gas

resident — n. someone who lives in a particular place

infrastructure — n. the basic equipment and structures (such as roads and bridges) that are needed for a country, region, or organization to function properly

capacity — n. the ability to hold or contain people or things