< Major Space Missions Planned in 2021
Update Required To play the media you will need to either update your browser to a recent version or update your Flash plugin.
By Bryan Lynn
24 January 2021


After a series of successful space missions during the past year, 2021 promises some exciting new international exploration projects.

The U.S. space agency, NASA, is expecting its explorer, called Perseverance, to land on the Red Planet on February 18. The explorer, or rover, is on a mission to "search for signs of life and collect rock and soil samples," NASA says.

Perseverance is NASA's fifth Mars explorer. It is carrying a small experimental helicopter, called Ingenuity. The device would be the first to test the abilities of such a craft on another planet. One important experiment will test a device designed to capture carbon dioxide from Mars' atmosphere and turn it into oxygen. 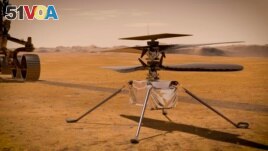 This illustration made available by NASA depicts the Ingenuity Mars Helicopter on the red planet's surface near the Perseverance rover, left. (NASA/JPL-Caltech via AP)

China's Tianwen-1 spacecraft launched last July on a mission to search Mars for signs of water. It is also expected to reach Mars in February. The spacecraft will attempt to land at Utopia Planitia, a large flat area in the northern half of the planet. Once there, Tianwen-1 will deploy a rover for exploration.

The United Arab Emirates (UAE) launched its Hope Probe in July 2020. The explorer is also to reach the Red Planet next month. The country describes Hope as "the first probe to provide a complete picture of the Martian atmosphere and its layers."

The mission will study climate and weather activity on the lower atmosphere of Mars. Hope will also observe and study hydrogen and oxygen in the Martian upper atmosphere, the UAE's space agency said.

New space vehicles to be tested

Boeing is expected to carry out another unpiloted flight test of its Starliner spacecraft. The company was chosen by NASA – along with America's SpaceX – for its Commercial Crew Program. The program uses private spacecraft to transport U.S. astronauts to the International Space Station (ISS). SpaceX has already completed two successful crewed missions to the ISS.

If Boeing's unpiloted test goes well, the company is expected to move ahead with its first crewed test flight of Starliner.

NASA said it plans to complete final preparations for the first flight of its Space Launch System (SLS) rocket and Orion spacecraft for a possible launch sometime in the autumn. The flight would be the first unpiloted test flight for SLS and Orion. The goal is to complete a month-long mission around the moon.

The test is part of NASA's Artemis program, which aims to land the first woman and next man on the moon by 2024. The program's long-term goal is to establish a continued human presence on the moon.

In late July, NASA says it will launch its first "test for planetary defense" against asteroids. The mission is called the Double Asteroid Redirection Test (DART). It will send a spacecraft to purposely crash into an asteroid at a high speed in an attempt to change the asteroid's orbit in space. The target is a near-Earth asteroid called Didymos. The operation will only be a test of defensive capability, since Didymos represents no threat to Earth.

In October, NASA plans to launch its Lucy space mission. The operation aims to study a population of unusual objects orbiting Jupiter known as the Trojan asteroids. The space agency says the mission will involve a 12-year trip to eight different asteroids.

The James Webb is a large infrared telescope that has a nearly seven-meter mirror for observing space. NASA says the mission is designed to look deeper into space and offer more answers about the past of the universe than any other spacecraft.

Bryan Lynn wrote this story for VOA Learning English, based on reports from The Associated Press, Reuters and NASA. Mario Ritter, Jr. was the editor.

mission – n. the flight of a spacecraft to perform a certain task or job

sample – n. a small amount of something that gives information about what it was taken from

probe – n. a vehicle used to examine or observe something closely

layer – n. a level of something spread over an area

capability – n. the ability to do a certain job or task

mirror – n. a piece of glass that reflects light or images