< Machine Learning Used to Predict Where New Coronaviruses Might Develop Next
Update Required To play the media you will need to either update your browser to a recent version or update your Flash plugin.
By Bryan Lynn
17 February 2021


Researchers have used artificial intelligence (AI) methods in an effort to predict which animals might develop new kinds of coronaviruses that affect humans.

Scientists believe the new coronavirus spreading around the world, which causes the disease COVID-19, likely started in bats. It then jumped to another animal before infecting humans. 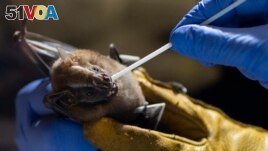 One way to prevent new pandemics is for experts to identify which animals in different parts of the world are more likely to develop coronaviruses. Researchers involved in the study say one way new coronaviruses form is when two different versions of the virus infect one animal. When this happens, genetic material from the viruses "recombines," or mixes, in a cell. This can result in a new coronavirus version.

The research involved a computer algorithm that examined data about the genetic structure of coronaviruses and information about different mammals. An algorithm is a set of steps that are followed in order to complete a computer process. Some algorithms are powered by machine learning, a form of AI.

The new study identifies a large number of mammals that could be future carriers of coronaviruses, which can infect both animals and humans. The results of the research were recently published in Nature Communications.

One of the project's lead researchers was Maya Wardeh. She is with the Institute of Infection, Veterinary and Ecological Sciences at the University of Liverpool. She said in a statement that until now, there has not been a lot of research on how different mammals are affected by different coronaviruses. But, such information "could offer insights into where viral recombination might occur," Wardeh added.

The machine learning system examined 411 different coronavirus versions and 876 possible mammal species. The goal was to identify the mammals most likely to be co-infected and possibly carry new coronaviruses.

The results suggested there are about 11 times more links between mammal species and coronavirus versions than had been identified in the past. The system also predicted 40 times more mammal species that can be infected "with four or more different (kinds) of coronaviruses than have been observed to date."

Marcus Blagrove was co-leader of the research. He said results of the study can help scientists better understand the new coronavirus, which has already developed into different versions.

When looking at the current coronavirus, the team said the machine learning system had identified hosts in which SARS-CoV-2 recombination could happen. It predicted at least 126 non-human species in which the new coronavirus could be found.

The study lists some specific species that scientists can watch as possible hosts for coronaviruses. They include a bat species called the lesser Asiatic yellow bat, which is common in East Asia but not well studied. Others were the common hedgehog, the European rabbit and the house cat.

The scientists admitted the results were based on limited data and said further research is needed to support the findings. However, they noted that recent testing on possible mammal hosts for the new coronavirus had confirmed a number of the system's predictions.

The results might be used to help discover new coronavirus versions before they jump from animals to humans, the researchers said. Next, they plan to expand their research to include bird species to further study "the full range of important coronavirus hosts."

Bryan Lynn wrote this story for Learning English, based on reports from the University of Liverpool and Nature Communications. was the editor.

mammal – n. types of animals that feed milk to its young and that usually have hair or fur covering most of its skin

insight – n. the ability to understand what something is really like

host – n. a living organism on or in which a parasite lives

domestic – adj. kept at home as a pet and not in the wild