< Los Angeles Opens Its First Tiny Home Village for Homeless
Update Required To play the media you will need to either update your browser to a recent version or update your Flash plugin.
By Anna Matteo
18 March 2021


Amy Skinner watched as workers began building tiny colorful structures across from a park where she sometimes slept in North Hollywood.

Tiny homes are being used for housing in costly areas of the United States. Others have joined the "tiny house movement" to live a simpler life.

In Los Angeles, California, tiny homes are now being used as temporary shelters for people like Amy Skinner. She has been homeless for three years.

In early February, Skinner received the key to one of the 39 tiny homes on Chandler Street. She and her partner, John Golka, moved into the 6-square-meter space with their little dog, Smalls. 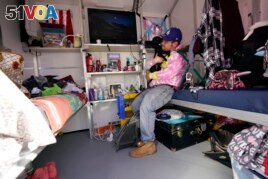 The tiny home has four windows, two beds, places for belongings, and an air conditioner. The welcome mat at the front door says: "This is our happy place."

"Being able to lock the door and have a place to sleep is huge," said Skinner who is 48 years old. She added, "That's so hard to do when you're on the streets."

The tiny home village also has community space, including tables where people can eat and an area for toilets and showers.

The project was developed and paid for by the city of Los Angeles. It is part of an emergency effort to solve the worsening homelessness crisis. Similar projects went up in other California cities, including San Jose and Sacramento, and also across the United States in Seattle, Washington; Minneapolis, Minnesota; and Des Moines, Iowa.

In 2020, there were about 66,400 homeless people in Los Angeles County. That number is an increase of more than 12 percent from a year earlier. More than 150,000 people are homeless across the state of California.

The pandemic has forced even more people onto the streets. Homeless shelters had to turn away people to maintain social distancing rules. A 2016 measure to pay for homeless housing has not started. So, officials began looking for ways to solve the problem.

City officials selected the land on Chandler Street for the tiny home village because it could not be used for anything else. Not everyone supported the plan. The officials had to promise nearby neighbors that the village would be safe and clean.

Ken Craft is head of the non-profit Hope of the Valley which operates Chandler Street village. He asked worried neighbors if they would rather have the tents or the tiny homes on the land.

He said the village offers services that can help people out of homelessness. They include mental health treatment, legal aid, and help with job searches. Amy Skinner is getting her Social Security card, which she hopes will help her find a job.

The tiny homes cost $7,500 each. And the cost for the entire project was $5 million. Hope of the Valley is building two more villages in North Hollywood. More are planned in other neighborhoods.

Pete White is director of the Los Angeles Community Action Network. He said the tiny homes of Chandler Street are too small. He said his group is developing a similar community with slightly larger homes for homeless people.

"We know that we can't build ourselves out of the crisis. But we are learning that you can make progress," he said, "if you can show that projects like these actually work."

At Chandler Street, the housing is temporary. The goal is for people to stay a few months and then move on to permanent housing.

Ted Beauregard is one of the first persons to stay in the tiny homes. The 63-year-old became homeless for the first time when the pandemic stopped his business. He plans to leave in April.

"I'm using this as a stepping-stone," he said of his tiny house.

Christopher Weber reported this story for the Associated Press. Anna Matteo adapted it for VOA Learning English. Hai Do was the editor.

park – n. a piece of public land in or near a city that is kept free of houses and other buildings and can be used for pleasure and exercise

key – n. an instrument by which the bolt of a lock (as on a door) is turned or by which an engine is started

welcome mat – n. a small rug that is placed by the door of a person's house, apartment, etc., for guests to wipe their feet on before entering

table – n. a piece of furniture consisting of a smooth flat slab fixed on legs

toilet – n. a large bowl attached to a pipe that is used for getting rid of bodily waste and then flushed with water

shower – n. a bath in which water is sprayed on the body or a device for providing such a bath

tent – n. a portable shelter that is used outdoors, is made of cloth (such as canvas or nylon), and is held up with poles and ropes

stepping-stone – n. a means of progress or advancement