< Listening to a Spider’s Web
Update Required To play the media you will need to either update your browser to a recent version or update your Flash plugin.
By Anna Matteo
20 April 2021


The sound is strange and not of this earth.

Markus Buehler is an engineering professor at the Massachusetts Institute of Technology (MIT). He said from communicating to building, spiderwebs offer much information about their creators. 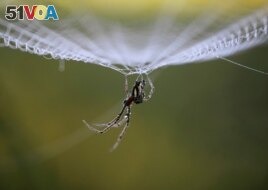 Dewdrops collect on a spider as it rests on its web in the early morning in Lalitpur, Nepal, October 11, 2011. (Reuters Photo/Navesh Chitrakar)

He explained to Reuters that spiders use "vibrations as a way to communicate with the environment" and with other spiders.

He said, "We have recorded these vibrations from spiders and used artificial intelligence to learn these vibrational patterns. Buehler then explained the scientists connected those patterns with certain actions, "...basically learning the spider's language."

Buehler and his researchers created 3D models of spiderwebs when the spiders were doing different things -- such as making and repairing their webs as well as hunting and feeding. They then listened for patterns in the spider signals and recreated the sounds using computers and mathematical processes.

"Spiders are a whole different animal," said Buehler. He explained they can hear and see things that we cannot with our human ears and eyes. So, by using science and math to turn vibrations into music, we begin to experience and better understand the world of the spider.

Buehler hopes his team's work could help humans to understand the language of a spider and one day communicate with them.

The music, said Buehler, is what "... the spider would also experience. And so, we can begin to feel a little bit like a spider in that way."

There are more than 47,000 kinds of spiders. They all create these webs to provide housing and catch food. Scientists say silk, the material created to from a spiderweb, is five times stronger than steel.

Buehler said that understanding the living structure of a spiderweb could lead to improvements of man-made materials and structures.

Reuters staff wrote this story for Reuters News Agency. Anna Matteo adapted it for VOA Learning English. Hai Do was the editor.

spiderweb -n. the silken web spun by most spiders and used as a resting place and a trap for prey

artificial intelligence-n. a branch of computer science dealing with the simulation of intelligent behavior in computers

vibration -n. a continuous slight shaking movement : a series of small, fast movements back and forth or from side to side

pattern -n. the regular and repeated way in which something happens or is done