< Legislators, Educators, Students Push for Asian American Studies in Schools
Update Required To play the media you will need to either update your browser to a recent version or update your Flash plugin.
By Gregory Stachel
22 June 2021


U.S. lawmakers, educators and students are among those pushing for all school-age children to be taught more Asian American history.

The Asian American Student Union at Farmington High School in the state of Connecticut is part of this effort. It organized a meeting after the killing of six Asian women in Atlanta, Georgia in March.

Lily Feng is co-president of the group. She thought maybe 10 or 15 students would attend. By the end of the meeting, however, nearly 100 people had joined.

When she saw the reaction of other students, she said she knew how much they wanted to learn about Asian American issues.

Feng said, "Our Asian American and Pacific Islander community members, they want their voices to be heard." The student group has brought in speakers, had discussions and created lessons about Asian American history. 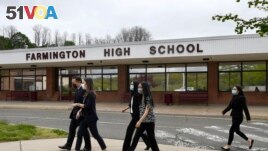 Illinois could become the first state to require public schools to teach events of Asian American history if the governor signs a bill that passed the state legislature in May. Lawmakers have proposed similar requirements this year in Connecticut, New York, and Wisconsin.

Jennifer Gong-Gershowitz is an Illinois state representative. She said she supported the bill because of increasing anti-Asian violence and language.

Gong-Gershowitz said she knew little of the discrimination her family had faced in earlier generations. She said she knew so little because it was not taught in school and her family did not speak openly about it.

She did not learn about the Chinese Exclusion Act until she studied at law school. The act was an 1882 law that placed restrictions on immigration from China. The law was withdrawn in 1943.

Gong-Gershowitz learned about the threat of removal from the country that the law represented for her grandparents. She said she understands that history is central to dealing with violence today.

She said, "empathy comes from understanding, and we cannot do better unless we know better."

United States Representative Grace Meng is a member of the Democratic Party from New York. She has reintroduced legislation meant to increase the teaching of Asian American history.

Nicholas Hartlep is a professor at Berea College in Kentucky. He wrote a book about the way Asian Americans are shown in learning materials. He said Asian Americans are mostly not included in schoolbooks. He also said it is good to see legislation aimed at teaching history, but funding to support the requirements is necessary for them to make a difference.

The growing discussions of Asian issues have given support to efforts to develop learning materials for schools that explore Asian American history.

Some educators in the U.S. are creating their own Asian American history content. Freda Lin and Cath Golding are providing materials for teachers through Project YURI, an education group.

Jason Oliver Chang is a professor at the University of Connecticut. He has worked to provide support for the state's legislation on Asian American studies.

He commented on what he thinks ethnic studies are. "It's about teaching in a way that engages the student...with the structures of power that shape their world," Chang said.

Annie Ma reported this story for The Associated Press. Gregory Stachel adapted it for VOA Learning English. Mario Ritter was the editor.

empathy – n. the feeling that you understand and share another person's experiences and emotions

fund – v. to provide money for (something)

engage –v. to cause someone to take part in something, like a discussion