< Leaders Call for Ceasefire as Conflict Spreads in Ethiopia
Update Required To play the media you will need to either update your browser to a recent version or update your Flash plugin.
By Jill Robbins
04 November 2021


African and Western nations on Thursday called for an immediate ceasefire in Ethiopia. Tigrayan forces from the country's north have been nearing the capital this week.

The U.S. special envoy for the Horn of Africa, Jeffrey Feltman, arrived in the capital, Addis Ababa. He asked for a halt to military operations and a start to ceasefire talks. African Union Commission Chair Moussa Faki Mahamat said he met Feltman to discuss efforts toward talks and political solutions.

The U.S. Embassy in Addis Ababa approved requests by some employees and family members to leave the country because of the worsening hostilities.

The European Union and the East African partnership of the Intergovernmental Authority on Development (IGAD) joined those calling for a ceasefire. IGAD urged both sides to show restraint, cool tensions and work out their differences through discussion. The two sides are the central government and the Tigray People's Liberation Front (TPLF) and its allies. 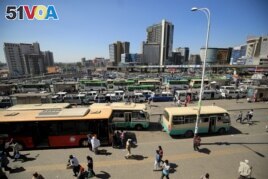 Ugandan President Yoweri Museveni called for an IGAD meeting on November 16 to discuss the conflict.

Kenyan President Uhuru Kenyatta issued a statement on Wednesday saying, "The fighting must stop!" He called on the two sides "to put down their arms and to cease the fighting, to talk, and to find a path to sustainable peace."

U.N. Secretary-General Antonio Guterres said he spoke to Ethiopian Prime Minister Abiy Ahmed on Wednesday "to offer my good offices to create the conditions for a dialogue so the fighting stops".

Addis Ababa police spokesperson Fasika Fanta said on Thursday that police had arrested "many people" since the government declared a state of emergency on Tuesday. Locals told Reuters on Wednesday that many Tigrayans had been arrested.

But Fasika said arrests were not based on ethnicity. "We are only arresting those who are directly or indirectly supporting the illegal terrorist group," he said. "This includes moral, financial and propaganda support."

Fasika also said many people were registering weapons at police stations around the city. The government asked people on Tuesday to prepare to defend their areas. "Some are even coming with bombs and heavy weapons. We are registering those too," he said.

Streets and stores in Addis Ababa were busy as usual on Thursday morning, though some locals said there was a feeling of uneasy calm.

"There are rumors about the approach of the rebels. People debate about the conflict, most of the people accuse the government for what happened," one man in the capital said.

Abiy's government declared the state of emergency on Tuesday as the Tigrayan forces threatened to push forward to Addis Ababa. TPLF spokesman Getachew Reda said on Wednesday that the Tigrayan troops were in the town of Kemise in Amhara state, 325 kilometers from the capital.

Maggie Fick, George Obulutsa and Ayenat Mersie reported on this story for Reuters. Jill Robbins adapted it for Learning English. Ashley Thompson was the editor.

sustainable – adj. able to last or continue for a long time

dialogue – n. a discussion or series of discussions that two groups or countries have in order to end a disagreement

rumor – n. information or a story that is passed from person to person but has not been proven to be true

What do you think of the conflict in Ethiopia? We want to hear from you. Write to us in the Comments Section.