< Leaders at UN General Assembly Talk of Vaccine Inequality
Update Required To play the media you will need to either update your browser to a recent version or update your Flash plugin.
By Jill Robbins
23 September 2021


Sharing COVID-19 vaccines has been a major subject of discussion at this year's United Nations General Assembly meeting in New York.

Most of Thursday's speakers were leaders from African nations. Their countries are not able to get enough vaccines to protect their people.

Ramaphosa said that it is "an indictment on humanity" that more than 82 percent of the world's COVID-19 vaccines are in the hands of rich countries. He said less than one percent have gone to poor countries. He added, "nnless we address this as a matter of urgency, the pandemic will last much longer" as new forms of the virus appear.

The struggle to contain the coronavirus also has been a big issue in speeches given at the U.N. meeting.

In a statement to the U.N., Mokgweetsi Masisi, the President of Botswana said: "Botswana shares the frustration by many and strongly supports the call for the vaccines to be treated as a global public good."

On Wednesday, American President Joe Biden announced that the U.S. would buy 1 billion of Pfizer's COVID-19 shots to share with the world. That was two times the amount of his earlier promise. He also said he supported a goal of vaccinating 70 percent of the world's population within the next year.

Some countries have had vaccines widely available to their populations for months. But other countries have struggled to get supplies. The African Centers for Disease Control and Prevention reports that four percent of the population is fully vaccinated.

Ramaphosa took part in a meeting Wednesday that was called by Biden to talk about increasing efforts to vaccinate people all over the world. At that meeting, Biden announced the U.S. deal to buy an additional 500 million doses of the Pfizer COVID-19 vaccine to send to other countries.

"Of the around 6 billion vaccine doses administered worldwide, only two percent of these have been administered in Africa, a continent of more than 1.2 billion people," Ramaphosa said. "This is unjust and immoral."

Because of the coronavirus pandemic, a number of world leaders made video presentations instead of traveling to New York to speak in person. About half of Thursday's speeches were by video. 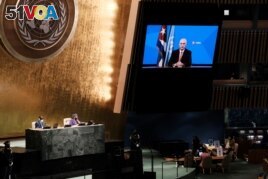 Speaking on video from Havana, Cuban President Miguel Díaz-Canel denounced the U.S. embargo against Cuba. He said it has been made worse during the COVID-19 pandemic.

Speaking at the U.N., Panama's President Laurentino Cortizo said his country has vaccinated more than half of its population. "Thanks to this, we are only weeks away from reaching herd immunity," he said.

Cortizo asked for the support of the international community to deal with the large number of migrants passing through his nation. Many of the migrants are from Africa and the Caribbean islands. Cortizo said, "This is everyone's responsibility."

Jill Robbins adapted this report for Learning English from VOA and Associated Press Reports and other materials. Mario Ritter, Jr. was the editor.

discuss – v. to give information, ideas, opinions, etc., about (something) in writing or speech

indictment – n. an expression or statement of strong disapproval

address – v. to give attention to (something)

frustration – n. a feeling of anger or annoyance caused by being unable to do something

dose – n. the amount of a medicine, drug or vitamin that is taken at one time

herd immunity – n. the situation where a large portion of a population becomes immune to an infectious disease, limiting further disease spread

What do you think of the speeches of the African leaders? We want to hear from you. Write to us in the Comments Section.