< Late Arriving Cold Cuts Ice Fishing Time in the US
Update Required To play the media you will need to either update your browser to a recent version or update your Flash plugin.
By Dan Friedell
18 February 2021


It may currently be very cold in the northern United States, but most of the winter was a little too warm for ice fishing. Scientists are just now able to study the 2021 population of a small fish popular in ice fishing.

They are called rainbow smelts. People catch them through small holes dug through the ice surface of a frozen body of water. About 15 years ago, the rainbow smelt population began to drop in the U.S. The government declared them "a species of special concern," and began researching the fish. 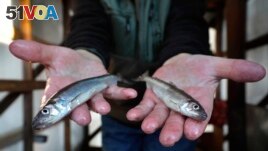 A lack of ice in cold weather states this year has made it difficult for scientists to study the rainbow smelt population. (AP Photo/Robert F. Bukaty, files)

Scientists want to find out why there are many fewer smelt today than in the 1970s and 1980s. Thirty years ago, fishermen caught millions of kilograms of the fish each year. In 2018, they only caught about 22,000 kilograms.

Researchers think climate change, loss of habitat and overfishing are all involved in the decreasing numbers.

Wintry weather came late this year in Maine, where some smelts live. Scientists there could not catch them until early February when the thick ice finally formed.

The lack of ice also stopped sport fishing for smelts. And that hurt businesses linked to the activity.

"(I'm) just going to try to pay for expenses right now," he said.

In Ohio, Tony Muscioni helps people catch a type of fish called walleye in Lake Erie each winter. He said he had thought the lake would not ice over this year at all. Now, there finally is some thick ice.

"You've just got to watch where you're going now," he said.

Wildlife departments around the Northern U.S have warned fishermen to be careful on the ice.

Tom Hawley studies water with the National Weather Service. In Maine, he said, there has been about half the usual amount of ice. Normally, there are about 50 centimeters.

That is because January was about 3 degrees Celsius warmer than usual.

Patrick Whittle wrote this story for The Associated Press. Dan Friedell adapted it for Learning English. Caty Weaver was the editor.

Do you have ice fishing where you live? We want to hear from you. Write to us in the Comments Section and visit 51VOA.COM.

habitat - n. the place or type of place where a plant or animal naturally or normally lives or grows