< Large Drugmaker to Plead Guilty to Criminal Charges
Update Required To play the media you will need to either update your browser to a recent version or update your Flash plugin.
By Susan Shand
22 October 2020


While the United States deals with COVID-19, another public health concern is being largely ignored: the crisis of opioid addiction. Opioid addiction has been linked to the deaths of more than 470,000 Americans over the past 20 years.

That may be about to change.

Purdue Pharma is the maker of Oxycontin, a powerful painkiller at the center of America's opioid problem. The U.S. Department of Justice announced Wednesday that Purdue Pharma will plead guilty to federal criminal charges as part of an $8-billion legal settlement. 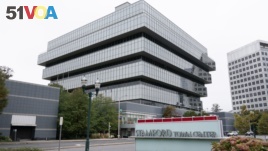 This Wednesday, Oct. 21, 2020 photo shows Purdue Pharma headquarters in Stamford, Conn. Purdue Pharma is the maker of Oxycontin, a powerful painkiller at the center of America's opioid problem.

The deal does not free any of the company's officers or owners from legal action. The federal government is continuing to investigate the possibility of additional charges.

The settlement shows that the federal government will hold major drug makers responsible for the opioid addiction crisis.

Opioids are a class of drugs that can reduce pain. They include the illegal drug heroin, man-made opioids such as fentanyl and pain relief medicines sold at drug stores. Patients can purchase such painkillers only under doctors' orders.

In 2020, the state of Ohio may have one of its deadliest years of opioid drug overdoses. More people died there from overdoses in May than in any month in at least 14 years. That information comes from the state's health department.

Ohio is considered critical to victory for candidates seeking to become president of the United States.

The problem of opioid addiction has also become an election campaign issue. Both President Donald Trump and former Vice President Joe Biden have talked about their personal connections to drug addiction.

Biden's son, Hunter Biden, has had problems with drugs. Trump's brother Fred was a life-long alcoholic before his death in 1999.

Early in his presidency, Trump declared the opioid crisis a national health emergency.

In 2018, the president signed legislation to increase federal spending on opioid abuse to record levels. A Bipartisan Policy Center study found that federal spending to fight opioid addiction more than doubled in Trump's first full year in office. As part of that, federal treatment and recovery money increased by 300 percent.

But because of a shortage of medical specialists, states have not been able to spend all the money they received. Some states worry that the money will not continue, and programs would have to be cancelled, the report found.

The federal settlement comes less than two weeks before the presidential election. In the settlement, Purdue Pharma is admitting that it paid doctors to write more prescriptions for Oxycontin. The company also admits it lied when it claimed to have an effective program to avoid the misuse of the drug. And Purdue admits it reported misleading information to the Drug Enforcement Administration.

Ed Bisch lost his 18-year-old son to an OxyContin overdose nearly 20 years ago. He said he wants to see the company's officers face criminal charges.

"The fact that this doesn't grant anyone immunity, I'm heartened by that," he said after the deal was announced.

This story is based on reports from the Associated Press. Susan Shand and John Russell adapted it for Learning English. George Grow was the editor.

addiction – n. a strong and harmful need to have or do something (such as gamble)

plead – v. to say in court that you are either guilty or not guilty of a crime : to make a plea

overdose – n. an amount of a drug or medicine that is too much and usually dangerous

prescription – n. a written message from a doctor that officially tells someone to use a medicine, therapy, etc.

immunity – n. special protection from what is required for most people by law — usually + from