< Language ‘Speed Dating’ Attracts Jewish, Palestinian Students
Update Required To play the media you will need to either update your browser to a recent version or update your Flash plugin.
By Jonathan Evans
03 November 2021


Israeli Jews and Palestinian Arabs in Jerusalem are learning Hebrew and Arabic from each other modeled on the idea of speed dating.

About 20 students meet weekly to learn each other's language. They are guided by cards with simple situations written out designed to start a conversation.

Each student has a partner. When a whistle sounds every 20 minutes, the students change partners.

The meetings help the Palestinians improve their Hebrew language skills required for dealing with Israeli officials. And the Jews gain a better understanding of Arabic.

Most Palestinians in Jerusalem live in the city's east, an area captured by Israel in the 1967 Middle East war. Only basic Hebrew is studied in East Jerusalem schools. That makes it difficult for Palestinians to reach a very high skill level in the language.

"And it's the same for Israelis - if they do study Arabic, it's an Arabic you can't use," said Maya Giz.

She is a Hebrew teacher and spoke of the classical, and not commonly spoken, version of Arabic. 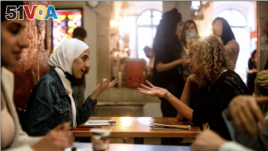 Giz started the project in 2019 with Sahar Mukhemar, a Palestinian sports instructor and a former student of hers. She says the language exercises are a "crossing of a mental border" between the two peoples.

She said Palestinians and Israelis taking part in the program share "the same embarrassment of talking and ... (can) break the barrier of fear together."

Jamila Khouri, a Palestinian, said learning Hebrew could help her and others "merge well in the community and find a job opportunity in a good field."

Tensions in the Israeli-Palestinian conflict sometimes end in violence. Eli Benita, a Jewish member of the group, said the language learning showed the possibilities of coexistence between Jews and Arabs in Jerusalem.

"I see that this is the only way to reach some kind of a peaceful routine of life here in this region we live in," he said.

Rinat Harash reported on this story for the Reuters news service. Jonathan Evans adapted this story for Learning English. Susan Shand was the editor.

speed dating – n. an event at which each participant converses individually with all the prospective partners for a few minutes in order to select those with whom dates are desired

whistle – n. a small device that makes a very high and loud sound when a person blows air through it

embarrassment – n. something or someone that causes a person or group to look or feel foolish

routine – n. a regular way of doing things in a particular order

region - n. a part of a country, of the world, etc., that is different or separate from other parts in some way