< The Lady in Black by Eleanor H. Porter
Update Required To play the media you will need to either update your browser to a recent version or update your Flash plugin.
By Lawan Davis
09 October 2020


Our story today is called "The Lady in Black." It was written by Eleanor H. Porter. Here is Faith Lapidus with the story.

The house was very still. In the little room over the porch, the Lady in Black sat alone. Near her, a child's white dress lay across a chair. On the floor at her feet lay a tiny pair of shoes. A doll hung over a chair and a toy soldier occupied the little stand by the bed. 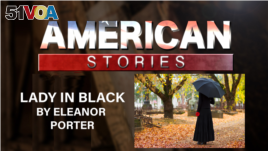 The Lady in Black by Eleanor H. Porter

And everywhere was silence—the strange silence that comes only to a room where the clock has stopped ticking.

The clock stood on the shelf near the end of the bed. The Lady in Black looked at it. She remembered the wave of anger that had come over her when she had reached out her hand and silenced the clock that night three months before.

It had been silent ever since and it should remain silent, too. Of what possible use were the hours it would tick away now? As if anything mattered, with little Kathleen lying out there white and still under the black earth!

The Lady in Black moved restlessly and looked toward the closed door. Behind it, she knew, was a little boy with wide blue eyes who wanted her. But she wished he would not call her by that name. It only reminded her of those other little lips--silent now.

"Muvver!" The voice was more demanding.

There was a short silence, and then the door opened slowly.

"Pe-eek!" It was a cry of joyful discovery, but it was followed almost immediately by silence. The unsmiling woman did not invite him to come near. The boy was unsteady at his first step. He paused, then spoke carefully, "I's--here."

It was maybe the worst thing he could have said. To the Lady in Black it was a yet more painful reminder of that other one who was not there. She gave a sharp cry and covered her face with her hands.

"Bobby, Bobby" she cried out, in a release of unreasoning sadness. "Go away! Go away! I want to be alone--alone!"

All the brightness fled from the boy's face. His eyes showed a feeling of deep hurt. He waited, but she did not move. Then, with a half-quieted cry, he left the room.

Long minutes afterward, the Lady in Black raised her head and saw him through the window. He was in the yard with his father, playing under the apple tree.

The Lady in Black looked at them with serious eyes, and her mouth hardened at the corners.

Bobby had someone to play with him, someone to love him and care for him, while out there on the hillside Kathleen was alone--all alone.

With a little cry the Lady in Black sprang to her feet and hurried into her own room. Her hands shook as she pinned on her hat and covered herself with her black veil. But her step was firm as she walked downstairs and out through the hall.

The man under the apple tree rose hurriedly and came forward.

"But she's alone--all alone. You don't seem to think! No one thinks--no one knows how I feel. You don't understand. If you did, you'd come with me. You wouldn't ask me to stay--here!" choked the woman.

"I have been with you, dear," said the man gently. "I've been with you today, and every day, almost, since--since she left us. But it can't do any good--this continuous mourning over her grave. It only makes more sadness for you, for me, and for Bobby. Bobby is--here, you know, dear!"

It was not a long walk to the burial place. The Lady in Black knew the way. Yet, she stumbled and reached out blindly. She fell before a little stone marked "Kathleen." Near her a gray-haired woman, with her hands full of pink and white roses, watched her sympathetically. The gray-haired woman paused and opened her lips as if she would speak. Then she turned slowly and began to arrange her flowers on a grave nearby.

The Lady in Black raised her head. For a time she watched in silence. Then she threw back her veil and spoke.

"You care, too," she said softly. "You understand. I've seen you here before, I'm sure. And was yours--a little girl?"

The gray-haired woman shook her head.

"Forty years--so long! How could you have lived forty years--without him?"

"One has to--sometimes, dearie, but this little boy wasn't mine."

"But you care. You understand. I've seen you here so often before."

"Yes. You see, there's no one else to care. But there was once, and I'm caring now, for her sake."

"Oh-h!" It was a tender little cry, full of quick sympathy. The eyes of the Lady in Black were on the stone marked "Kathleen."

"It ain't as if I didn't know how she'd feel," said the gray-haired woman. "You see, I was nurse to the boy when it happened, and for years afterward I worked in the family. So I know. I saw the whole thing from the beginning, from the very day when the little boy here met with the accident."

"Accident!" It was a cry of concern and sympathy from Kathleen's mother.

"Yes. It was a runaway and he didn't live two days."

"I know! I know!" choked the Lady in Black. Yet she was not thinking of the boy and the runaway horse accident.

"Things stopped then for my mistress," continued the little gray-haired woman, "and that was the beginning of the end. She had a husband and a daughter, but they didn't seem to be important--not either of 'em. Nothin' seemed important except this little grave out here. She came and spent hours over it, bringin' flowers and talkin' to it."

The Lady in Black raised her head suddenly and quickly looked into the woman's face. The woman went on speaking.

"The house got sadder and sadder, but she didn't seem to mind. She seemed to want it so. She shut out the sunshine and put away many of the pictures. She sat only in the boy's room. And there, everything was just as it was when he left it. She wouldn't let a thing be touched. I wondered afterward that she didn't see where it was all leadin' to, but she didn't."

The Lady in Black sat very still. Even the birds seemed to have stopped their singing. Then the gray-haired woman spoke:

"So, you see, that's why I come and put flowers here. It's for her. There's no one else now to care," she sighed, rising to her feet.

"But you haven't told yet--what happened," said the Lady in Black, softly.

"I don't know myself really. I know the man went away. He got somethin' to do travelin' so he wasn't home much. When he did come he looked sick and bad. He come less and less, and he died. But that was after she died. He's buried over there beside her and the boy. The girl--well, nobody knows where the girl is. Girls like flowers and sunshine and laughter and young people, you know, and she didn't get any of them at home. So she went--where she did get 'em, I suppose.

"There, and if I haven't gone and tired you all out with my talkin'!" said the little gray-haired woman regretfully.

"No, no. I was glad to hear it," said the Lady in Black, rising unsteadily to her feet. Her face had grown white, and her eyes showed a sudden fear. "But I must go now. Thank you." And she turned and hurried away.

The house was very still when the Lady in Black reached home. She shivered at its silence. She hurried up the stairs, almost with guilt. In her own room she pulled at the dark veil that covered her face. She was crying now, a choking little cry with broken words running through it. She was still crying as she removed her black dress.

Long minutes later, the Lady--in black no longer--moved slowly down the stairway. Her eyes showed traces of tears, but her lips were bravely curved in a smile. She wore a white dress and a single white rose in her hair. Behind her, in the little room over the porch, a tiny clock ticked loudly on its shelf near the end of the bed.

There came a sound of running feet in the hall below, then:

And with a little sobbing cry Bobby's mother opened her arms to her son.

"The Lady in Black" was written by Eleanor H. Porter. It was adapted by Lawan Davis who was also the producer. The storyteller was Faith Lapidus.

porch - n. a structure attached to the entrance of a building that has a roof and that may or may not have walls

afterward - adv. at a later time; after something has happened

mourning - v. to feel or show great sadness because someone has died

runaway - adj. a vehicle or animal moving in a fast and dangerous way that cannot be controlled

traces - n. a very small amount of something