< Lack of Rain Has California Town Asking Visitors to Save Water
Update Required To play the media you will need to either update your browser to a recent version or update your Flash plugin.
By Gregory Stachel
12 August 2021


The coastal town of Mendocino in California is experiencing a severe drought. Thousands of people were coming to visit the town when coronavirus restrictions eased. But the visitors are seeing signs asking them to save water.

About 1,000 people live in Mendocino which is 240 kilometers north of San Francisco. The town is known for its houses from the 1800s and its fog. But two years of very little rain has emptied wells that the local people depend on.

Mendocino's water problems grew after the city of Fort Bragg, a few kilometers to the north, informed officials that it also had very little water. That is because the nearby Noyo River reached its lowest level in many years.

Ryan Rhoades is head of the Mendocino City Community Services District. His office helps supervise the town's underground water supply. He said, "This is a real emergency." 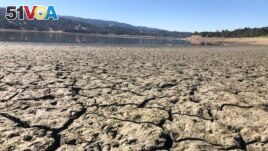 A dry bed is seen at Lake Mendocino near Ukiah, Calif., Wednesday, Aug. 4, 2021. The town of Mendocino gets some of their water from this water supply, but most of the lake water goes to Sonoma County. (AP Photo/Haven Daley)

Eric Hillesland and his wife normally would not need to buy extra water until July or August to supply their hotel, the Alegria Oceanfront Inn. But the property's well added little water earlier this year and by February the Hilleslands were ordering 13,250 liters a week.

Hillesland said he is asking guests to keep the water shortage in mind. He and his wife also are finding ways to save water such as using bed coverings made of a special cloth that needs less water to wash.

Mendocino depends on groundwater in a system of about 400 privately owned wells. Many of them were dug by hand when the town was established in the 1850s. Locals keep their water in tanks.

The town's economy depends on the 2,000 tourists who come each day between May and October each year, Rhoades said.

Businesses have traditionally brought in extra water in the fall. But after a second dry winter, many have had to order more, much earlier than before.

With more tourists this year, locals have had to find drinking water from places that are farther away. This has increased the price. In February, Hillesland said he was paying $300 to bring in 13,250 liters of water. Now it costs $600. Some restaurants are cutting back their hours to reduce costs.

Hillesland said if the lack of water gets worse he will have to start closing rooms. If that happens, the two will have a situation like they had at the beginning of the pandemic: no money coming in but bills to pay.

People in the town are considering ways to deal with the problem. They include bringing in water by boat, airplane or train. They also could add community tanks that can hold up to 1.9 million liters of water.

People in the town are considering asking the federal government to set up a center to turn saltwater into fresh water and even a system to turn fog into water. Rhoades said all of these ideas would be costly and the town would need the support of the state and federal governments.

A company that developed new technology to capture water in fog proposed setting up a test center in Mendocino at no cost. It would then sell the water to the community. But Rhoades said it would affect the town's beautiful views and getting a permit would be difficult. A saltwater treatment center would require government permits and environment studies.

Rhoades said transporting drinking water from inland might be the faster answer although it is costly.

Robert Pinoli is the president of a local train company, Mendocino Railway. He said he is ready to help. He could transport 747,000 liters with each trip to Mendocino from the nearby town of Fort Bragg. But that idea too has a problem. Officials in the town of Willits, which would have to supply the water, decided against selling it.

For now, Mendocino locals are depending on people like Brian Clark who has been selling water from his well outside of town and transporting it by truck. Clark said he cannot keep up with the demand.

He said, "I'm really hiding from the phone, because I'm getting way more calls than I have water, and I'm hearing from people I've never met, never heard of, and I can't help them."

Clark has lived in Mendocino for many years. He said he has not had such water problems since the 1970s when California faced the most severe drought on record.

Officials' are now waiving permits for tanks that can hold up to 18,900 liters and identifying wells with extra water near Mendocino. Rhoades said officials are asking the state to help pay for the bigger private tanks.

He said, "I want residents to be able to store more water now, while their wells are still somewhat productive, to make it through the next four months." He said if you have to buy water, you can get the most for your money.

view – n. the things that can be seen from a particular place

waive – v. to officially say that you will not use or require something that you are allowed to have or that is usually required