< Kyrgyzstan in Chaos, Election Results Canceled
Update Required To play the media you will need to either update your browser to a recent version or update your Flash plugin.
By Susan Shand
06 October 2020

Opposition activists released their leaders from prison while President Sooronbai Jeenbekov talked of the unrest as an effort to oust the government.

It is unclear who is in control of the country. 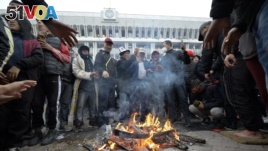 Protesters gather in front of the Kyrgyz government headquarters on the central square in Bishkek, Kyrgyzstan, Oct. 6, 2020. (AP)

The Central Election Commission canceled the results of elections Sunday in the face of large protests. On Monday, the commission gave the most seats to two parties controlled by Jeenbekov.

Supporters of 12 opposition parties took to the streets a short time later. They demanded the cancellation of the results and new elections.

Police moved to control the crowds with water cannons and tear gas, but failed to stop the protests. Monday night, protesters broke into both the parliament building and the presidential offices. Interfax reported that opposition supporters also took control of the City Hall in Bishkek, the capital.

The mayors of Bishkek and the country's second leading city, Osh, announced they were resigning, Reuters news agency reported.

Opposition activists reported they had freed former president Almazbek Atambayev as well as several other major political figures. Atambayev was serving 11-years in prison on corruption charges. He has declared his innocence.

Once part of the Soviet Union, Kyrgyzstan declared its independence in 1991. The Central Asian nation is a neighbor of China, but an ally of Russia. Two presidents have been removed by protests in Kyrgyzstan in the past 15 years.

President Jeenbekov has called for calm. He ordered security forces not to open fire on protesters. The government reported that one person was killed and over 680 wounded by Tuesday afternoon.

Burned cars were all around Bishkek. Protestors attacked the main government building, known as the White House.

The opposition said it had set up an organizing committee and was discussing a new government. Local news websites say the opposition has started appointing government officials.

"The leaders of parties that took part in the election have assumed responsibility for restoring public order," the group said.

Jeenbekov showed no immediate signs of giving up power. His supporters were gathering in Osh, local websites reported, where his brother, Asylbek Jeenbekov, called for unity and order.

Susan Shand wrote this story for VOA Learning English. Her report was based on information from The Associated Press and Reuters news agency. George Grow was the editor.

chaos - n. complete confusion and disorder : a state in which behavior and events are not controlled by anything

assume - v. to take or to decide without official approval