< Kosovo President Resigns to Face War Crimes Charges
Update Required To play the media you will need to either update your browser to a recent version or update your Flash plugin.
By Bryan Lynn
05 November 2020


Kosovo President Hashim Thaci resigned on Thursday to face war crimes charges brought by a court in The Hague in the Netherlands.

The 52-year-old leader said he had decided to step down "to protect the integrity of the presidency." 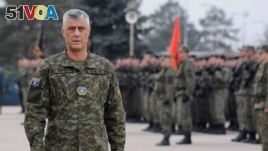 The charges are for war crimes and crimes against humanity. They date back to Thaci's involvement in Kosovo's war for independence from Serbia. Thaci was a commander of the Kosovo Liberation Army (KLA), an ethnic Albanian guerrilla group that fought against Serbian security forces in the 1998-1999 war.

Thaci was indicted in June, along with nine other former rebel leaders, by a special Kosovo court and prosecutor's office based in The Hague. The court was established in 2015 to investigate and try former ethnic Albanian rebel leaders for alleged war crimes.

Prosecutors accuse Thaci and other suspects of being responsible for the murders of nearly 100 civilians during the war. The group is also accused of causing the "enforced disappearance of persons, persecution and torture."

The charges relate to "hundreds of known victims of Kosovo Albanian, Serb, Roma, and other ethnicities and include political opponents," prosecutors said.

The president's closest ally, Kadri Veseli, said Thursday an indictment against him had also been confirmed by the court and that he would go to The Hague.

Thaci and Veseli both deny any involvement in war crimes.

A 78-day NATO air campaign against Serbian troops brought the war to an end.

Thaci said he was proud to have belonged to the Kosovo Liberation Army during the war. He called the force "the most sublime value of the Albanian nation." He called the indictment "the smallest price we have to pay for the freedom of our people."

The government said in a statement that all defendants should be considered innocent unless the court decides otherwise.

"No one may judge our fight for freedom," the government said in a statement. It added that the KLA "fought for the liberation of our country, to protect the house and not in a foreign land, and as such it has the support of the international community."

Thaci held a ceremony at his office to hand over presidential duties to the head of Kosovo's parliament, Vjosa Osmani. The government said the move was in line with the country's constitution.

Thaci was elected president in February 2016. Before that, he served as foreign minister, deputy prime minister and prime minister. His current term ends in April 2021, when the National Assembly was expected to elect a new president.

The Associated Press, Reuters, Agence France-Presse and VOA News reported on this story. Bryan Lynn adapted the reports for Learning English. Ashley Thompson was the editor.

integrity – n. honesty and the ability to do or know what is morally right

indict – v. to formally declare that someone should be put on trial for a crime

prosecutor – n. the person acting on behalf of a court process against a person accused of a crime to see if that person is guilty

account for – phr v. to be part of a total number of something

persecution – n. the treatment of someone unfairly or cruelly because of their race, religion, or beliefs

alleged – adj. accused of having done something wrong or illegal but not yet proven guilty