< Job Market Is Better than One Year Ago for New College Graduates
Update Required To play the media you will need to either update your browser to a recent version or update your Flash plugin.
By Dan Friedell
15 May 2021


One year ago, college graduates in the U.S. were worried about their futures.

After four years of study, they were ready to find jobs. But the economy was weak because of restrictions on businesses and travel meant to limit the spread of the new coronavirus.

Few employers were offering jobs. Some students found that promises of work were cancelled. Many 2020 graduates stayed at home for the last year, wondering when they would begin their careers.

Now, however, college students are about to graduate into an economy that is coming back to life. Alycia St. Germain is one example. She is graduating soon from the University of Minnesota. Last year, she lost a part-time job at a bookstore when many businesses closed because of the pandemic.

This year, she already has plans for a new job when she graduates. After studying child psychology, she will be working at a new child-care center in St. Paul, one of the large cities in Minnesota.

"This is probably the most positive thing that could happen," she said.

Things seem to have worked out for St. Germain. But for other students it will not be so easy to find a job. Lots of 2020 graduates are looking for jobs, too. 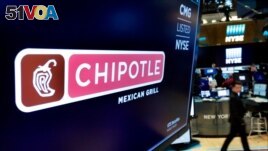 FILE - The logo for Chipotle appears above a trading post on the floor of the New York Stock Exchange.

Many businesses are now looking for workers. Restaurants are offering extra money and other perks. Chipotle is a restaurant that serves Mexican food. It has over 2,500 restaurants in the U.S. It recently announced that it will help pay for college for those who stay in their jobs for 120 days. Dominos, a pizza delivery company, is offering people who live near Washington, D.C. a $500 bonus to start working with the company.

Some economists say the United States is coming out of the pandemic recession so quickly that many businesses are having trouble finding qualified workers.

In March, U.S. employers added over 700,000 jobs. In April, the number was 266,000. That result was lower than economists expected. But jobs are still being offered faster than before the pandemic. Many jobs are in businesses that are looking for college graduates.

Brad Hershbein is an economist for the Upjohn Institute in Michigan. He said this recession will not be as bad as others for new college graduates. Jobs that college graduates can do from home are becoming available. He said it may be harder for people without college degrees.

Elise Gould is an economist at the Economic Policy Institute in Washington, D.C. While there are a lot of jobs, she said, it may still be hard for some college graduates to find just the right job.

"Because there is a large pool of unemployed workers, companies can pick exactly who they want and skip over people with less experience."

During a recession, some college graduates take lower-paying jobs. The jobs do not always require a degree. The problem with young people taking these jobs is that they will likely make less money for the first 10 years of their career.

But experts say there are many good jobs out there for people just starting. Sheila Jordan is the chief digital technology officer for Honeywell, a large American manufacturer. Jordan said she hopes to employ current students and those about to graduate as trainees. They are called interns. She then hopes to hire them again as employees once they graduate or finish training. She said she is looking for students who have experience with computer software, data analysis and computer security.

"That's a feeder group for us," she said about the students.

Some students feel good about the future. Dominique Davis is about to finish school at Tennessee State University. She was an intern, or a trainee, for the carmaker Toyota. She worked at the company's American headquarters in Texas in 2019. She continued her internship last summer from her parents' home in Illinois.

Although she was working in another state, she made an effort to meet people at Toyota by making a lot of video calls. She even talked with the vice president of her department almost every day.

"I think I networked even more this term than being in the building," she said. "It forces you to reach out. It's less awkward..."

Meeting new people to expand your career is called networking.

Davis is planning to go to graduate school next year. But she said she knows schoolmates who are looking for a job and are going into a difficult time.

"I have heard of multiple students who are having trouble getting interviews or internships," Davis said.

There have been fewer job choices for students who are looking for careers in other countries or in organizations like museums. Foreign travel and public spaces have mostly been closed for more than a year.

Lucius Giannini graduated last year and wanted to work for the Peace Corps or teach English outside of the U.S. Most foreign travel was impossible during the pandemic. His schoolmate, Natalie Naranjo-Morett will graduate next month from the University of California in San Diego. She studied history. She said it has been hard to find jobs at museums or other places where she can put to use what she learned in school.

A study by the American Alliance of Museums said about one-third of museums are worried about their future. Some think they may close for good by the autumn.

Naranjo-Morett said there are not many openings for people with a degree like hers.

"It's so difficult at this point, I kind of would go for anything," she said.

Travis Loller and Christopher Rugaber wrote this story for the Associated Press. Dan Friedell adapted it for Learning English. Mario Ritter, Jr. was the editor.

How is it for new graduates where you live? Tell us in the Comments Section and visit 51VOA.COM.

career –n. a job or profession that someone has for a long time

psychology –n. the science or study of the mind and behavior

pick --v. to choose or select from a group

analysis –n. the careful study of something to learn about its parts, what they do and how they relate to each other

perks –n. something extra that someone receives in addition to regular pay for doing a job — usually plural

bonus – n. an extra amount of money that is given to an employee

skip –v. to pass over or leave out (something)

pool –n. a supply of things or people that are available for use

feeder–n. a system that moves one thing to another

awkward–adj. not socially graceful or confident