< Japan Suspends Use of Some Moderna Vaccine Supply
Update Required To play the media you will need to either update your browser to a recent version or update your Flash plugin.
By Dan Friedell
30 August 2021


Japanese health officials announced Sunday they were suspending the use of another 1 million doses of Moderna's COVID-19 vaccine. The latest action came as Japan already put on hold 1.63 million doses after they were found to contain foreign particles.

The news comes as the Delta variant of COVID-19 is infecting more people than ever before. In August, Japan recorded over 25,000 daily COVID-19 cases for the first time.

The Japanese health ministry said it suspended the use of the Moderna vaccine after two men died. The men had fevers after getting their second shots and died two days later. Health officials warned they did not have evidence that the vaccine shots caused their deaths. 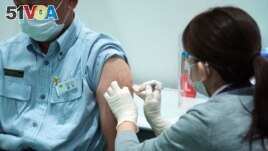 FILE - A Tokyo municipal government employee receives a shot of the Moderna COVID-19 vaccine at a vaccination center at a local government building, in Tokyo, Japan, July 1, 2021.

The latest reports of particles – thought to be either metal or plastic – in the vaccine containers came from an area outside of Tokyo and in Okinawa. Japan's health ministry said the foreign particles might be pieces of rubber used to cover the small glass bottles containing the vaccine. If a doctor or nurse did not insert the needle properly, they could have broken off small pieces of rubber.

The health ministry said no safety or efficacy issues had been identified with the vaccine. It said the suspension was a precaution while the causes of death are being investigated.

"It is unlikely, in my opinion, that contamination of foreign substances led directly to sudden deaths," said Takahiro Kinoshita, a doctor with a vaccine information group. However, he agreed that more investigation is needed.

Last week, Japan halted the use of 1.63 million doses of the Moderna vaccine. Moderna and the Spanish company Rovi, which bottles Moderna vaccines for countries other than the United States, said at the time that a manufacturing issue could have led to the contamination.

Japanese drug company Takeda said Monday it is working to find out what went wrong with Rovi's production. Takeda sent the supplies of Moderna vaccine around the country.

Throughout Japan, 500,000 people received shots from those supplies. Over 4,500 people received doses of vaccine from that supply in Gunma, an area close to Tokyo. So far, however, no one has reported a problem.

Nicholas Rennick is an Australian doctor working at the NTT Medical Center in Tokyo. He said health officials should investigate the problem. But Rennick urged Japan to continue vaccinating people because "so many of the population remain unvaccinated and unprotected."

Rocky Swift wrote this story for Reuters. Dan Friedell adapted it for Learning English. Hai Do was the editor.

What should people in Japan do about the COVID-19 vaccine shots? Tell us in the Comments Section and visit 51VOA.COM.

dose –n. the amount of medicine to be taken at one time

variant –adj. different in some way from others of the same kind

fever –n. a body temperature that is higher than normal

needle –n. a very thin, pointed steel tube that is pushed through the skin so that something (such as a drug) can be put into your body or so that blood or other fluids can be taken from it

efficacy –n. the power to produce a desired result or effect

precaution –n. something that is done to prevent possible harm or trouble from happening in the future

contamination –n. the state of something being impure, unclean or dangerous