< Japan’s Princess Mako Goes Ahead with Marriage Plans
Update Required To play the media you will need to either update your browser to a recent version or update your Flash plugin.
By Mario Ritter Jr.
06 October 2021


Japan's Princess Mako and the man she wants to be her husband are expected to get married this month. Wedding ceremonies, however, are not planned.

The marriage of Princess Mako and Kei Komuro is not fully supported by the public. Palace officials say that is because of a financial controversy involving her future mother-in-law.

The controversy involving Komuro's mother is a difficult issue for the imperial family. It has led to a public rebuke that has delayed their marriage for more than three years. 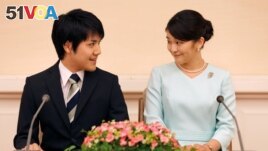 Princess Mako, the elder daughter of Prince Akishino and Princess Kiko, and her fiancee Kei Komuro, a university friend of Princess Mako, smile during a press conference to announce their engagement at Akasaka East Residence in Tokyo, Japan, Sept. 3, 2017

Komuro returned to Japan recently from New York. He was studying to become a lawyer in the city. He grew his hair long and tied it in a ponytail. That is considered unusual for someone marrying a princess because the Japanese imperial family is bound by tradition. His appearance only added to the criticism.

The two are to register their marriage on October 26. The Imperial Household Agency said they also will hold a news conference together at that time. The two are expected to start a new life together in New York later this year.

The agency said there will be no wedding celebration or other rituals for the couple "because their marriage is not celebrated by many people."

Palace officials said Mako has also decided not to take a $1.35 million payment she has the right to receive for leaving the imperial family. Mako would be the first female imperial family member since World War II not to receive the payment when marrying a commoner, or a person who is not a part of royalty.

The agency said Mako was recently believed to have a mental condition that palace doctors described as a form of traumatic stress disorder. That condition is said to be caused by extreme mental tension.

Mako turns 30 three days before the wedding. She is a niece of Japan's Emperor Naruhito. She and Komuro were classmates at Tokyo's International Christian University when they announced in September 2017 that they wanted to marry the following year. But the financial controversy surfaced two months later. The wedding was suspended.

The controversy involved money Komuro's mother received from a man she was to marry. It is not clear whether that money, which was spent on Komuro's education in Japan, was a loan or a gift.

Komuro left for New York in 2018 to study law. He did not return to Japan until last week.

The Imperial House Law only permits males to carry forward the line of emperors. Female members of the royal family must give up their royal position when they marry a commoner. This rule has resulted in a decrease in the size of the royal family and a shortage of possible successors to the throne.

Mari Yamaguchi reported this story for the Associated Press. Mario Ritter Jr. adapted it for VOA Learning English. Susan Shand was the editor.

controversy –n. argument that involves many people who strongly disagree about something

rebuke –v. to speak in a way that shows displeasure or anger

rituals –n. (pl.) a formal ceremony or series of acts that is always performed in the same way

couple –n. two people who are to be married or who have an emotional relationship; two people or things that are together

royalty –n. people who are related to a ruler in a country

niece –n. the daughter of your brother or sister