< Japan Confronts Rising Inequality
Update Required To play the media you will need to either update your browser to a recent version or update your Flash plugin.
By Jonathan Evans
16 October 2021


Japan's stock market has increased and luxury cars are selling well in Tokyo after eight years of economic growth under Abenomics.

Abenomics is the economic policy begun under former Prime Minister Shinzo Abe. Under the policy, the Japanese government has used government spending and made lending money easier to help the economy.

But recent data show that Japan's new wealth is centered in a small part of the population rather than spread widely.

New Prime Minister Fumio Kishida has said dealing with that issue is important. Kishida has promised to deal with income inequality which the coronavirus health crisis has made worse. But he has offered few ideas as to how he will do so.

"It's like everyone has become poor," said Masanori Aoki. He owns a small coffee shop in a working-class area of northeast Tokyo.

"With Abenomics, the finance minister talked about wealth trickling down. But there was no such thing, was there? Almost nothing," he said. He took a job as a part-time bus driver when the COVID-19 pandemic forced him to temporarily shut down his store. 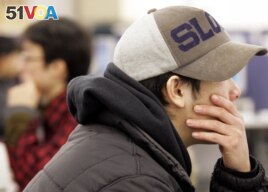 Kimie Kobayashi works at a childcare center in Tokyo. She says her wages have not increased for four years. She said many who work in the industry have learned that wages rarely increase.

"I can't say that my livelihood is getting any better," said Kobayashi. "The government collects tax but that money isn't used to help people who are really in need."

In a study by the Organization for Economic Cooperation (OECD), Japan's poverty rate is the second highest among G7 nations and ninth highest among OECD countries. That information is based on data available up to 2020.

Wages rose just 1.2 percent from 2012 through 2020, government data showed. Japanese households' average wealth fell by 3.5 percent from 2014 to 2019. However, another government study showed that the wealthiest 10 percent saw an increase.

Inequality is far more evident in countries such as the United States and Britain. Japan stood around the middle of 39 countries examined by the OECD in 2020.

The situation did improve for some in Japan. Manabu Fujisaki recently spent 7 million yen, about $62,000, on a Mercedes-Benz automobile using money made from investing in cryptocurrencies. A cryptocurrency is a form of digital money that is not regulated by a central bank and whose records are stored in an encrypted computer database. Fujisaki said he plans to build a 200-million-yen house in Tokyo next year.

And Alfa Romeo vehicle sales from April to September more than doubled from sales in 2020. Sales of other imported vehicles like Ferrari, Jaguar and Maserati also increased, industry data showed.

Takahiro Koike runs the department store Isetan. He said, "We're seeing a clear rise in demand for luxury goods among the new rich." By new rich, he means newly wealthy young businessmen and other high earners.

Kishida hopes to narrow the wealth disparity by forming what he calls a "new type of capitalism." That includes higher wages for public health and medical workers, and tax breaks to businesses that raise pay.

Shigeto Nagai is an economist at Oxford Economics. He said offering short-term tax breaks is not likely to influence businesses to raise wages. Instead, Nagai suggests reforms in areas such as Japan's strict labor system.

Kantaro Komiya and Leika Kihara reported on this story for the Reuters news service. Jonathan Evans adapted this story for Learning English. Mario Ritter, Jr. was the editor.

luxury – n. something that is expensive and not necessary