< Japan Celebrates Golfer’s Victory at the Masters
Update Required To play the media you will need to either update your browser to a recent version or update your Flash plugin.
By Dan Friedell
12 April 2021


Golfer Hideki Matsuyama became the first Japanese champion of a men's major tournament Sunday at the Masters in Augusta, Georgia.

The event is the first of the four professional major tournaments, every year. The others are the U.S. Open, the British Open and the PGA Championship.

Over four days of play, Matsuyama finished one stroke better than Will Zalatoris, a Californian playing in the tournament for the first time.

"It was really wonderful," Prime Minister Yoshihide Suga said of the Masters win. Japan is preparing to open the Tokyo Olympics in July, after COVID-19 forced a year-long postponement of the 2020 Summer Games. Matsuyama's success, Suga said, "moved our hearts and gave us courage." 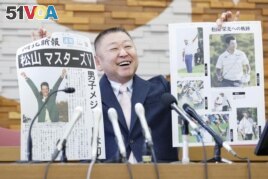 Japanese golfers have seen some international success. Two, Chako Higuchi and Hinako Shibuno, won championships of women's majors in 1977 and 2019.

The closest a Japanese player came to a men's major win was Isao Aoki in 1980. He finished second to Jack Nicklaus at the U.S. Open that year.

The Masters is the only one of the four men's majors where there has been a winner from all continents where golf is played.

Aoki spoke about Sunday's finish in comments published by Golf Digest online. He noted another Matsuyama victory that lifted the spirits of the Japanese people during a difficult time. In 2011, Matsuyama won non-professional play at the Masters tournament, earning the Silver Cup award. His performance came just weeks after the earthquake and resulting tsunami and nuclear power factory disaster in the Fukushima area of Japan. About 18,000 people were killed.

Aoki said Matsuyama "gave hope to so many people," when they were feeling bad.

Nicklaus said Matsuyama will always be a hero in Japan, adding, "this is a great day for him, for Japan, and for the global game of golf!"

The U.S. Embassy in Japan offered congratulations to Matsuyama.

Outside a busy transport station in Tokyo, one man called the victory "tremendous." He said Matsuyama had set a great goal for Japan's next generation.

The Associated Press wrote this story. Dan Friedell adapted it for Learning English. Caty Weaver was the editor.

Do you think Matsuyama's victory will lift the spirits of Japanese people? Tell us in the Comments Section and visit 51VOA.COM.

tournament –n. a sports competition or series of contests that involves many players or teams and that usually continues for at least several days

stroke –n. an act of hitting a ball or the movement made to hit a ball during a game

courage –n. the ability to do something that you know is difficult or dangerous

tsunami –n. a very high, large wave in the ocean that is usually caused by an earthquake under the sea and that can cause great destruction when it reaches land