< Jack-o'-Lantern: Why Is It Named 'Jack'?
Update Required To play the media you will need to either update your browser to a recent version or update your Flash plugin.
By Anna Matteo
24 October 2020

Decorating a pumpkin for the holiday can be a lot of fun, especially for children. Many people buy a pumpkin from a store or from a real pumpkin patch on a farm. 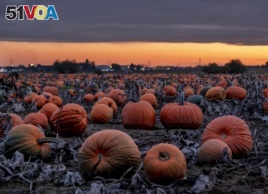 Hundreds of pumpkins lie on a field, or pumpkin patch, near Frankfurt, Germany, after sunset on Wednesday, Oct. 16, 2019.

Making a jack-o'-lantern takes time and at least one good, sharp knife. So, make sure you have plenty of both. This is why children do this activity with someone older.

First, cut off the stem, or top of the pumpkin. But don't throw it out. You will need it later to finish the jack-o'-lantern. Now, reach your hands inside the pumpkin and remove everything inside. And yes -- it will feel slimy.

Next, make a picture of a face or something else on the skin, or rind, of the pumpkin. Then, carefully cut along the lines of your artwork.

Finally, put a candle or some other lighting inside to light up the design you have cut. And there! You have turned a pumpkin into a jack-o'-lantern.

Now, you might have a few questions. For example, why does the term jack-o'-lantern have a man's name -- "Jack?"

Merriam-Webster's online dictionary gives one explanation. It says people in England began using the term in the 17th-century. It meant "a man with a lantern" or a night watchman.

At that time, people living in England reportedly called a man they did not know "Jack." So, an unknown man carrying a lantern was sometimes called "Jack with the lantern" or "Jack of the lantern."

Your next question might be: But what does this have to do with Halloween?

Merriam-Webster and Encyclopedia Britannica both say the term "jack-o'-lantern" comes from a very old Irish story about a man named Stingy Jack.

As the story goes, he tricked the Devil to get money. When Jack died, God refused to let him go to heaven. And the Devil, still angry about being tricked, did not allow Jack to go to hell either.

So, Jack's punishment was to wander the earth forever. His soul was stuck. And like most spirits trapped on Earth, he probably spent most of his time trying to frighten humans. At least, that's what I imagine trapped souls would do.

To protect themselves and frighten away Jack's wandering soul, people in Ireland would carve scary faces on turnips. I suspect that turnips were a common root vegetable at the time.

When Irish families moved to the United States, they brought this tradition with them. These immigrants began carving jack-o'-lanterns from pumpkins, which were more common than turnips in their new home.

Halloween is based on the Celtic celebration from ancient times. It marked the end of summer. It was believed that during this time of the year, the souls of those who had died that year would return to visit their homes.

Encyclopedia Britannica goes on to explain that in the 8th century, the Roman Catholic Church moved All Saints' Day, a religious day, to November 1. This meant that All Hallows' Eve, or Halloween, fell on October 31.

Traditions from the old Celtic celebration remained, such as wearing costumes to hide yourself from the souls of the dead and carving jack-o'-lanterns.

Today, people who celebrate Halloween continue to do both!

And that's Words and Their Stories. Until next time, I'm Anna Matteo.

Anna Matteo wrote this story for Learning English with information from Encyclopedia Britannica. George Grow was the editor.

lantern – n. a usually portable lamp with a protective covering

decorate – v. to make (something) more attractive usually by putting something on it

pumpkin patch – n. a small piece or area of land where this usually large round orange fruit of a vine related to the squash and cucumber that is used for food or decoration grows : a patch is often different from what is around it

candle – n. wax that has been formed into a stick or another shape and has a string in the middle that can be burned

slimy – adj. having a wet, slippery feel or look

heaven – n. the place where God lives and where good people go after they die according to some religions

hell – n. the place where the devil lives and where evil people go after they die according to some religions

wander – v. to move about without a fixed course, aim, or goal

carve – v. to cut (something, such as a pattern or design) into a surface

costume – n. the clothes that are worn by someone (such as an actor) who is trying to look like a different person or thing