< Italy Reopens its Famed Pompeii Museum
Update Required To play the media you will need to either update your browser to a recent version or update your Flash plugin.
By Caty Weaver
29 January 2021


Italy reopened its famous Antiquarium this week. The museum was created to keep and show objects from the ancient city of Pompeii.

Life in Pompeii ended almost 2,000 years ago, after a massive burst of the nearby Mount Vesuvius volcano. The city was quickly buried by ash and lava. Many people were immediately killed. In fact, scientists found some human remains had turned to glass because the heat from the explosion was so intense.

For many years now, specially trained scientists called archaeologists have been digging in the area that was once Pompeii. It is now an archeological park. 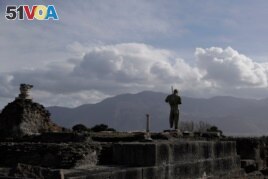 A partial view of the archeological site of Pompeii during the inauguration of the museum Antiquarium, in Pompeii, southern Italy, Monday, Jan. 25, 2021.

The Antiquarium was created in the 1870s as a place to keep the findings. For many years, visitors were able to see some of the frescoes unearthed by archaeologists as well as everyday objects that the people of Pompeii used.

Bombings in World War Two damaged the museum. Then, in 1980, a deadly earthquake shook the park. Officials were forced to close the Antiquarium.

It had remained closed until now.

Current COVID-19 restrictions bar most people from visiting the newly reopened museum. Only visitors from Italy's Campania area, which includes the city of Naples and the Pompeii ruins, are permitted to enter.

Pompeii has long been one of Italy's top tourist sites. When the tourism industry fully reopens, admission to the ruins will also include a visit to the Antiquarium.

The re-opening of the museum after so many years is "a sign of great hope during a very difficult moment," said Pompeii's long time director, Massimo Osanna.

On show in the last room of the museum are casts from the remains of some of Pompeii's citizens. Osanna said that part of the museum is emotionally powerful for him.

Much of ancient Pompeii remains to be discovered at the park. Although tourism has halted during the pandemic, archaeologists have kept working.

Just one month ago, Osanna announced the discovery of an ancient fast-food restaurant at Pompeii. Archaeologists were able to fully uncover the eatery. The find helped researchers learn about the food Pompeii's citizens enjoyed. Researchers even discovered what was for sale at the restaurant on the day the ancient city met its explosive end.

AP reported on this story. Caty Weaver adapted the report for Learning English. Ashley Thompson was the editor.

fresco – n. the art of painting on wet plaster

tourist – n. a person who travels to a place for pleasure

cast – n. a container that is used to give its form or shape to something that is poured or pressed into it; also : an object that is made by using such a container