< National Zoo: It's a (Giant Panda) Boy!
Update Required To play the media you will need to either update your browser to a recent version or update your Flash plugin.
By Caty Weaver
06 October 2020


The Smithsonian National Zoo has confirmed that its six-week old giant panda is a male.

he finding was announced on a zoo video earlier this week. Panda-keepers showed a painting in blue made by the baby's father, Tian Tian. Blue is a color culturally linked to baby boys in the United States and many other places. For baby girls, the color is pink.

The giant panda was born August 21. Male and female giant pandas look very similar when young, so the zoo did a genetic test to learn the sex of the newborn. 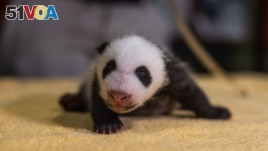 The panda cub does not yet have a name. The zoo usually waits until giant pandas are 100 days old to give them a name.

His mother Mei Xiang is much bigger --- weighing about 105 kilograms.

The birth was welcomed as rare, happy news during the COVID-19 health crisis, which forced the zoo to close for several months.

After Mei Xiang's pregnancy was announced in August, internet traffic on the zoo's popular Panda live video feed increased by 1,200 percent, zoo officials said. When the baby was born about a week later, traffic went so high that the video connection broke for many watchers. Zoo officials had to add bandwidth as a result.

"Something like this is kind of a miracle for us," National Zoo Director Steve Monfort said at the time. "It lifts the spirits of my team and the whole world."

For now, the Panda-cam is still the only way the public can see the pandas. The zoo reopened in a limited way on July 24. But the panda house remains closed to visitors.

Mei Xiang, at age 22, is the oldest giant panda to successfully give birth in the United States. The oldest panda in the world to give birth was 23 at the time and in China.

Mei Xiang is mother to three other young, Tai Shan, Bao Bao and Bei Bei. They went to live in China at age four, under an agreement between China and the United States.

butter –n. a solid yellow substance made from milk or cream that is spread on food or used in cooking

bandwidth –n. a measurement of the ability of an electronic communications device or system (such as a computer network) to send and receive information