< Israeli Researchers Teach Goldfish to Drive Robotic Car
Update Required To play the media you will need to either update your browser to a recent version or update your Flash plugin.
By Bryan Lynn
16 January 2022


Israeli researchers say they have successfully taught a goldfish to drive a small, robotic car.

The team said the fish showed its ability to navigate toward a target in order to receive a food reward.

For the experiment, the researchers built what they called a Fish Operated Vehicle (FOV). The main part of the vehicle was a fish tank attached to a moving machine with four motorized wheels. 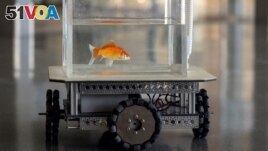 Attached to the top was a system used to follow all movements of the fish and vehicle. The system was operated by lidar, a technology that uses light lasers to map environments and measure distances.

A team at Israel's Ben-Gurion University of the Negev carried out the research. Results of the experiment were recently reported in the publication Behavioral Brain Research.

Researcher Shachar Givon told the Reuters news agency it was surprising how quickly the fish learned to drive the vehicle. "They're confused at first - they don't know what's going on," he said. "But they're very quick to realize that there is a correlation between their movement and the movement of the machine that they're in."

The team used six different goldfish in the study. Each fish took part in about 10 driving exercises. A colorful target was clearly marked on a wall opposite the tank. Each time a fish reached a target, it was rewarded with food.

The researchers said the fish were able to navigate to the target even if something happened to temporarily take them off the path. And, they said, the fish were not fooled by false targets placed by the team.

Researcher Ronen Segev said some of the fish proved to be "excellent" drivers. Others, he said, showed that while they could control the vehicle, they were not very good at driving it.

The team reported that their experiment led to two main findings. The first was that "navigational ability is universal rather than specific to the environment," researcher Givon said in a statement.

Secondly, the experiment showed that goldfish have the "cognitive ability" to learn to perform a complex operation "in an environment completely unlike the one they evolved in."

Givon compared the experiment to a human first learning to ride a bicycle or drive a car. In both of those cases, the beginning can be difficult, he said.

A description of the study noted that navigation is a "critical ability" for animal survival. Such an ability permits many kinds of creatures to find shelter, seek mates and be successful in many kinds of behaviors.

In this case, the researchers sought to find out whether the fish could use the same navigational skills they use in the water to move a vehicle traveling on land.

In the end, the team found the results demonstrated that a fish is able to keep its "space representation and navigation skills" when put into a completely "terrestrial," or land-based, environment.

Researcher Ronen Segev said, "We humans think of ourselves as very special. And many think of fish as primitive, but this is not correct." He added that there are many other "very important and very smart creatures."

navigate – v. to find the right direction for traveling by using maps or other equipment

confused – adj. unable to think clearly or understand something

correlation – n. a connection between two or more things, usually where one causes or influence the other

cognitive – adj. relating to how people think, understand and learn

evolve – v. to develop or make something develop

primitive – adj. relating to human society at a very early stage of development