< Israel: Vaccine Campaign Slowing Because of Misinformation
Update Required To play the media you will need to either update your browser to a recent version or update your Flash plugin.
By John Reynolds
18 February 2021


Israel is blaming online misinformation for a sudden slowdown in its vaccination campaign. The slowdown comes at a time when many countries are studying the Israeli experience to understand what may lie ahead.

Israel's vaccination rates are currently among the highest in the world. The country's Ministry of Health is leading its vaccination efforts. The health ministry has been using both warnings and incentives as it tries to get more people to get immunized.

"Decide whether you are part of the celebration or whether you will be left behind," Health Minister Yuli Edelstein wrote on Twitter. 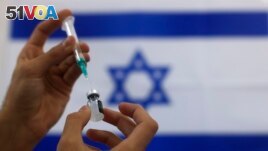 The Health Ministry has increased the number of employees who follow false claims about the vaccines. They look at anti-vaccination messages in Hebrew, Russian, Amharic, Arabic and English.

At the same time, local governments are turning to DJs and free food to get more people to come to vaccination centers. People who have not been vaccinated could soon be barred from concerts and museums.

Over 25 percent of the population has received both injections of the Pfizer/BioNTech vaccine. In addition, over 42 percent have received the first injection, said the Health Ministry. The vaccination campaign started in December.

However, Israel's vaccination rate has slowed since making the vaccine available to everyone over the age of 16. In February, Israel averaged just over 106,000 vaccinations each day. But, the health ministry recently said that January's daily average was more than 127,000.

In addition, infection rates remain high in Israel, probably because some groups refuse to be vaccinated. Different groups in the country are not taking the vaccines for different reasons. For example, younger Israelis often think they cannot get seriously sick. Some important ultra-Orthodox religious leaders have called on their followers to refuse vaccination. Also, some in Israel's Arab minority do not have complete trust in the country's Jewish leadership.

Israel, a country of 9.3 million people, has reported over 5,000 new cases each day over the past week, the health ministry said. The country has recorded over 723,000 cases of COVID-19 since the start of the crisis and nearly 5,400 deaths. Over 20 percent of the deaths were in the past month.

Last week Prime Minister Benjamin Netanyahu said the only barrier to the vaccine campaign was "the fake news and the superstitious...beliefs that are planted in the public and on the internet." Superstitious is a term that describes beliefs that are based in impossible powers or influences.

The Ministry of Health has reportedly spent millions of dollars in its efforts to educate the public. Official Einav Shimron said the ministry is working with doctors and religious leaders to increase efforts against misinformation.

incentive – n. something that encourages a person to do something or to work harder

DJ -- n. a disc jockey, a person who plays recorded music on the radio or at a party or nightclub

fake – adj. false, not true or not what is presents itself as