< Israel to Study ‘Possible Link’ between COVID Vaccine, Heart Problem
Update Required To play the media you will need to either update your browser to a recent version or update your Flash plugin.
By Dan Friedell
02 June 2021


Israel's Health Ministry said Wednesday there is a "possible link" between the second shot of Pfizer's COVID-19 vaccine and mild heart problems among young men.

The ministry said about 275 men aged 16 to 30 who received the vaccine reported a heart problem known as myocarditis over the last six months. It said the "link was found to be stronger among the younger age group, 16 to 19."

The cases of mild inflammation of the heart represent a very small percentage of more than 5 million vaccinated people. However, the ministry said it will extend the research "to investigate the possible link between these cases and the vaccine." 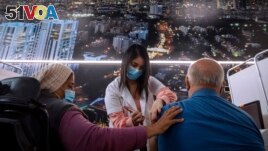 Drug-maker Pfizer said in a statement that it meets regularly with the Israeli Ministry of Health to review the data and "no causal link to the vaccine had been established."

Last month, the Centers for Disease Control (CDC) in the United States recommended more research on a possible link between mRNA vaccines and myocarditis. Both the Pfizer-BioNTech and Moderna vaccines are made with the technology.

The CDC said one set of data showed a higher than expected number of observed myocarditis among 16 to 24-year-olds. But the agency said another data set showed the number among vaccinated people is no greater than what would be expected in the general population.

Last week, the European Medicines Agency (EMA) added that heart inflammation, or myocarditis, after receiving the Pfizer vaccine had been no cause for concern. The health agency said it found such cases were similar to those in the general population.

Dr. Paul Offit is director of the Vaccine Education Center at Children's Hospital of Philadelphia. He said parents should still vaccinate their children because of the known risks of COVID-19.

Offit said: "I think that in the world of trying to weigh relative risks, the disease is a greater risk."

Jeffrey Heller wrote this story for Reuters. Dan Friedell adapted it for Learning English. Hai Do was the editor.

inflammation –n. a condition in which a part of your body becomes red, swollen, and painful

recommend –v. to suggest that someone do (something)