< Israel Announces Discovery of more Dead Sea Scrolls
Update Required To play the media you will need to either update your browser to a recent version or update your Flash plugin.
By John Russell
17 March 2021


Israeli archaeologists said they have discovered about 80 new pieces of ancient writings known as Dead Sea Scrolls in a desert cave south of Jerusalem.

The writings are the first new scrolls to be found in 60 years. The writings are religious in nature. They have lines written in Greek. They are believed to have been hidden during a Jewish revolt against the Romans nearly 1,900 years ago. 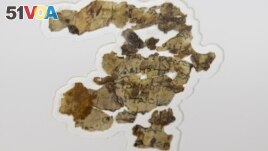 The Israel Antiquities Authority says, based on the writing style, they likely come from the first century.

The new discovery adds to a larger group of Dead Sea Scrolls - a collection of Jewish writings first found in desert caves in the West Bank near Qumran in the 1940s and 1950s.

Some of the scrolls date to over two thousand years ago. They include the earliest known copies of biblical writings and documents explaining the beliefs of a little understood Jewish group.

The roughly 80 new pieces were found in a place known as the "Cave of Horror." It has the name because 40 human skeletons were found there during digs in the 1960s. The cave is about 40 kilometers south of Jerusalem.

The scrolls were found during an operation by the Israel Antiquities Authority. The goal was to find scrolls and other ancient objects to prevent possible stealing.

The writings are believed to have been part of a scroll put in the cave during the Bar Kochba Revolt. This was an armed Jewish revolt against Rome during the time of Emperor Hadrian in the years between 132 and 136.

Oren Ableman is a Dead Sea Scroll researcher with the Israel Antiquities Authority. He noted a difference between the newly discovered writings and other known writings in Hebrew and Greek.

Joe Uziel is head of the Authority's Dead Sea Scrolls group. He said "some of those differences are important." Uziel added, "Every little piece of information that we can add, we can understand a little bit better" how the biblical writing came into its traditional Hebrew form.

In 1961, Israeli archaeologist Yohanan Aharoni led a dig in the "Cave of Horror." His team found nine pieces of writing belonging to a scroll written in Greek.

Since then, no writings have been found during archaeological digs. But many have been sold in illegal markets. They were apparently taken from the caves.

For the past four years, Israeli archeologists have launched a major campaign to examine caves in the Judean Desert. The aim is to find ancient objects before people damage the area, destroying important information in search of objects to be sold illegally.

The authority said since the beginning of the operation in 2017, there have been almost no antiquities stolen in the Judean Desert.

Ilan Ben Zion reported on this story for Reuters. John Russell adapted it for Learning English. Hai Do was the editor.

archaeologist – n. a science that deals with past human life and activities by studying the bones, tools, etc., of ancient people

scroll -- n. a long piece of paper that rolls around one or two cylinders and that usually has something written or drawn on it

biblical -- adj. relating to, taken from, or found in the Bible