< Is UN Peacekeeping Losing Its Appeal?
Update Required To play the media you will need to either update your browser to a recent version or update your Flash plugin.
By Gregory Stachel
28 July 2021


In the early 1990s, Canada had over 3,000 troops deployed in peacekeeping missions around the world. Today, it has only a few dozen.

Canada is not the only Western country to have greatly reduced such missions. The drop in numbers, military experts say, demonstrates the changing nature of conflict in a post-Cold War world.

Major Tim Dunne is a retired officer in the Canadian Armed Forces. He was deployed in several peacekeeping operations. Now, he is a researcher for the Canadian Global Affairs Institute. He said United Nations peacekeeping is "falling out of fashion." In other words, it is becoming less common and popular.

Dunne told VOA that before the collapse of the Soviet Union in 1991, most international conflicts were driven by competition between the United States and the Soviet Union. He said this created the need for a neutral army to stand between them.

Dunne said that most modern conflicts, like in Syria and Iraq, are too complex for peacekeeping to work.

"The factors that allow for effective peacekeeping aren't there anymore," Dunne said. 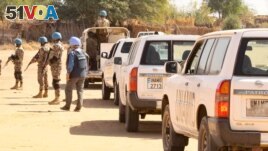 Members of the United Nations and African Union peacekeeping mission (UNAMID) gather with their vehicles in Kalma camp for internally displaced people in Nyala, the capital of South Darfur, Dec. 31, 2020.

It is not only Canada that is rethinking the value of United Nations' peacekeeping.

Emily Estelle works for the Washington-based American Enterprise Institute. Estelle points to the lack of public support in Western nations for the costly and sometimes dangerous missions.

She used the Sahel, an area in Africa, to explain the change in operations.

She said France leads the counterterrorism operation in Mali but is working to end its involvement and the operation. She said it is in part because of pressure within France and an upcoming election.

She also said Mali and Somalia, which is facing a similar situation, would not be able to replace the influence peacekeepers have, "if and when they withdraw."

In Canada's case, the country's long-standing history to U.N. peacekeeping operations has largely been replaced by involvement in NATO (North Atlantic Treaty Organization) operations. These include involvement in the operation that defeated the Islamic State extremist group in Iraq and Syria and the NATO operation, now ending, in Afghanistan.

Canadian Prime Minister Justin Trudeau's administration has promised to deploy more troops and police to international peacekeeping. But the proposed numbers remain only in the hundreds.

Charlie Herbert is a former top-level NATO advisor to the Afghan Ministry of the Interior and a former director at the Defense Academy of the United Kingdom.

Herbert said Britain is showing some interest in bringing new life to U.N. peacekeeping. He sees this as a reaction to the decision to pull NATO forces out of Afghanistan.

He told VOA, "The withdrawal from Afghanistan marks the end of an era."

He also said the withdrawal provides the chance for "...all Western nations to reconsider the use of their military as an instrument of their foreign policy."

He said Britain is using this as a chance to reinvest in high-end peacekeeping operations. It remains to be seen if other Western countries will follow Britain's lead.

Jay Heisler reported this story for Voice of America. Gregory Stachel adapted it for VOA Learning English. Ashley Thompson was the editor.

fashion –n. a style or way of behaving that is popular in a particular time and place

factor –n. something that helps produce or influence a result: one of the things that cause something to happen

counterterrorism –n. actions by a group, army, etc., that are done to prevent terrorist attacks and destroy terrorist networks — often used before another noun

replace – v. to do the job or duty of (someone)

era –n. a period of time that is associated with a particular quality, event, or person