< Irish Court Finds US Company’s Bread… Isn’t Bread
Update Required To play the media you will need to either update your browser to a recent version or update your Flash plugin.
By Mario Ritter Jr.
07 October 2020


The highest court in Ireland has ruled that bread sold by an American fast-food restaurant cannot be legally defined as bread. The court said Subway restaurant's bread contains so much sugar that it failed to meet the legal definition of the food product.

The ruling came in a tax dispute brought by Bookfinders Limited, which operates Subway restaurants in Ireland. 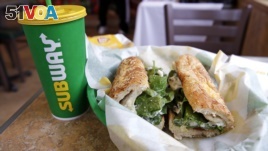 FILE - Ireland's Supreme Court has ruled that bread sold by the fast-food chain Subway, seen here on Feb. 23, 2018, contains so much sugar that it cannot be legally defined as bread. (AP Photo/Charles Krupa, File)

Bread is one of the world's most popular foods. It is made from a mixture of flour, water and yeast, which causes the bread to expand when heated.

Bookfinders had argued that some of its takeaway, or take-out, products should not be subject to a value-added tax. The list of products included hot drinks, such as tea and coffee, and heated sandwiches.

Ireland's Supreme Court rejected the company's appeal. Its judges ruled that the bread sold by Subway contains too much sugar to be considered a "staple food."

A staple food is something that is eaten all the time and part of many people's diets. Such foods are not subject to the value-added taxed.

"There is no dispute that the bread supplied by Subway in its heated sandwiches has a sugar content of 10% of the weight of the flour included in the dough, and thus exceeds the 2% specified," the court said.

The law notes a difference between "bread as a staple food" and other baked goods "which are, or approach...fancy baked goods," the judgement read.

Subway disagreed with the court's findings in a statement.

"Subway's bread is, of course, bread," the company said in an email. "We have been baking fresh bread in our restaurants for more than three decades and our guests return each day for sandwiches made on bread that smells as good as it tastes."

Bookfinders was appealing a 2006 decision by officials who refused to return value-added tax payments to the company. Lower courts had dismissed the case before it reached the Supreme Court.

The Associated Press reported this story. Mario Ritter Jr. adapted it for VOA Learning English. George Grow was the editor.

sandwich – n. a food product made with two pieces of bread, meat, cheese or other filling between them

dough – n. a mixture of flour, water and other materials that is cooked

exceed –v. to go beyond a limit, to surpass something

specified – adj. named in a document or speech