< Iran’s President-elect Says Nuclear Program ‘Non-negotiable’
Update Required To play the media you will need to either update your browser to a recent version or update your Flash plugin.
By Dan Novak
21 June 2021


Iranian President-Elect Ebrahim Raisi said Monday he would not meet with President Joe Biden or negotiate over Tehran's nuclear program. He also said he would not discuss the country's backing of regional militia groups.

Raisi, 60, is the head of the Iranian judiciary. Monday was the first news conference after Friday's presidential election. The hard-liner Raisi won an easy victory after other candidates were barred from running.

The U.S. must "lift all oppressive sanctions against Iran," Raisi said. Asked about Iran's missile program and its support of regional militias, he called the issues "non-negotiable."

Iran has invested in missiles to counter its Arab neighbors who have bought billions of dollars in American weapons. Those missiles can fly 2,000 kilometers and go across the Middle East and reach U.S. military bases in the region. 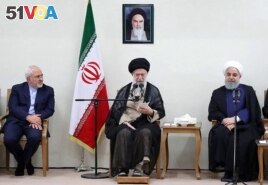 Iran also counts on support from militias like Yemen's Houthi rebels and Lebanon's militant Hezbollah. Those groups provide a balance against enemies like Saudi Arabia and Israel.

Asked about a possible meeting with Biden, Raisi answered simply: "No." Abdolnasser Hemmati was Raisi's more moderate competitor in the election. He said during the campaign he might have been willing to meet with Biden.

The White House did not immediately respond to Raisi's statements. Raisi was personally sanctioned by the U.S. government in 2019 due to his actions while serving as head of Iran's internationally criticized justice system. He is the first Iranian president to enter office under that condition.

Raisi was strongly supported by Iran Supreme Leader Ayatollah Ali Khamenei. The election had the lowest voter turnout in the Islamic Republic's history. Millions of Iranians did not vote in a protest of an election they saw as unfair. Khamenei did not allow reformist candidates to run or those who backed outgoing President Hassan Rouhani.

Raisi's election comes as negotiators in Vienna try to save a deal meant to limit Iran's nuclear program.

Previous U.S. president Donald Trump withdrew America from the agreement in 2018, so Iran stopped following the limitations set in the deal. It is now enriching uranium at 60 percent. That is its highest level ever, but still short of levels needed to produce weapons.

There was another round of negotiations about the nuclear deal Sunday. But Raisi's victory raised concerns that the deal could be saved. Monday, Raisi called sanctions relief as "central to our foreign policy" and called on the U.S. to return to "your commitments" in the deal.

On the topic of Saudi Arabia, Raisi said that Iran would have "no problem" with a possible reopening of the Saudi Embassy in Tehran. The embassy was closed in 2016 as relations between the countries worsened. Iran recently opened secret talks with Saudi Arabia to begin repairing relations.

Raisi was defensive when asked about his involvement in a 1988 mass execution during the Iran-Iraq war. After a cease-fire, members of an Iranian opposition group armed by Saddam Hussein, attacked across the Iranian border from Iraq in a surprise. Iran eventually stopped the attack.

Trials began around that time, with the fighters asked to identify themselves. Those who responded "mujahedeen" were sent to their deaths. Others were questioned about clearing minefields "for the army of the Islamic Republic," says a 1990 Amnesty International report.

International rights groups estimate that as many as 5,000 people were executed. Raisi served during the trials.

"All actions I carried out during my office were always in the direction of defending human rights," he said.

Jon Gambrell reported this story for The Associated Press. Dan Novak adapted it for VOA Learning English. Susan Shand was the editor.

sanction — n. an action that is taken or an order that is given to force a country to obey international laws by limiting or stopping trade with that country, by not allowing economic aid for that country, etc.

commitment — n. a promise to do or give something

execution — n. the act of killing someone especially as punishment for a crime