< International Competition for Wind Energy Production Growing
Update Required To play the media you will need to either update your browser to a recent version or update your Flash plugin.
By Caty Weaver
18 April 2021


Governments worldwide are expected to seek more proposals for wind power stations to produce electricity in coastal areas this year.

The new international wind power developments could produce more than 30 gigawatts of electricity. That is almost as much as the 35 gigawatts currently produced around the world. Some industry experts say the business environment for wind power is very competitive. 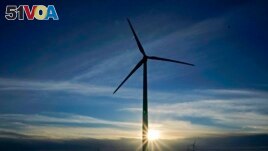 FILE - A wind turbine is pictured, Jan. 13, 2021, near Spearville, Kan. Recent studies contend that because of falling alternative energy prices, President Joe Biden's net-zero carbon goal can be accomplished more cheaply than once was thought.

Big oil companies are entering the renewable power market although it is less profitable than traditional operations. Earlier this year, BP and German company EnBW paid a record price for development rights to two offshore areas that could produce three gigawatts of electricity. The sites are near the coast of England, Wales and Northern Ireland.

The developers pay a yearly amount before making a final investment decision. The payment for BP and EnBW will amount to almost $1.4 billion made in four yearly payments for rights to the areas.

Offshore wind power developers, Iberdrola, Orsted and SSE all confirmed to Reuters they had unsuccessfully sought the contract.

Some experts say the high fees threaten the cost reductions the industry has gained over the past 10 years. Mark Lewis is with BNP Paribas, a French banking group. He said the recent fee deal would add around 35 percent to project development costs.

BP said the fee was reasonable considering the area of the sites in the Irish Sea. He said they are not in deep water and are close to land. The company said the conditions at the sites will permit shorter, less costly connection wiring.

But, some in the industry have expressed concern. Ben Backwell is chief of the Global Wind Energy Council, an industry group. He said there are not enough projects to meet demand.

"So you are going to create an over-heated market when what we want to see is more opportunities made available," he said.

Julien Pouget is a renewable energy expert with the French oil company Total. He said the technology is developing quickly. He noted announcements about larger wind turbines. He said the development makes his company hopeful about cost reductions that will make operations profitable.

Britain oversees the development contracts. The country guarantees producers a minimum price for electricity. But because industry costs are falling, the guaranteed price is now the lowest it has ever been: 30 percent lower than in 2017.

Asia and the U.S. are relatively new markets

Britain is the world's largest offshore wind market. It is estimated that 10 gigawatts of electricity can be produced there.

European countries including Denmark, Poland and France are expected to hold competitive sales of development rights called auctions this year.

In the United States, President Joe Biden wants to deploy 30 gigawatts of offshore wind power by 2030. There are currently 13 projects in development. They are expected to produce around 9.1 gigawatts of electricity and might begin operation by 2026.

Spanish energy company Iberdrola is already involved in development proposals in the American states of Rhode Island and Massachusetts through its U.S. group, Avangrid. BP agreed to pay $1.1 billion in a deal last year to buy one-half of two U.S. developments from the Norwegian company Equinor.

In Asia, Japan plans to develop up to 10 gigawatts of offshore wind electricity by 2030. The country plans to expand that amount to 30 to 45 gigawatts by 2040.

Iberdrola bought Japanese developer Acacia Renewables last year. It said it expects to take part in the sales in Japan.

However, experts warned that new areas cannot expect high prices for development rights, also called seabed leases. And they cannot expect to offer price guarantees as low as Britain's. Backwell of the Global Wind Energy Council said the industry in Asia and in the U.S. is still developing.

He said: "Each region has to build up its own industry and skills before they can expect to see the most competitive prices."

The Reuters news agency reported this story. Caty Weaver adapted it for Learning English. Caty Weaver was the editor.

gigawatt –n. a unit of power equal to one billion watts; a watt is a measure of energy

offshore –adj. in the ocean away from the coast

opportunity –n. an amount of time or a situation in which something can be done; a chance to do or gain something

turbine –n. an engine that has a part with blades that turn because of pressure from water, steam or air