< Indonesian Teacher Uses Clown to Teach Koran
Update Required To play the media you will need to either update your browser to a recent version or update your Flash plugin.
By Anna Matteo
14 May 2021


Learning the Koran is important for Muslims. But it does not always have to be serious, says Islamic teacher Yahya Edward Hendrawan.

To help children learn to read and recite the Koran with cheer, he makes it fun. He dresses up like a clown!

Hendrawan is a teacher in the Indonesian city of Tangerang. When he teaches reading to the children, he wears a colorful clown costume, with white and pink face makeup, and a red nose. 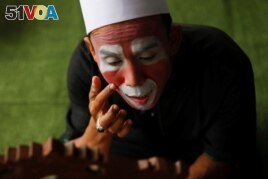 Hendrawan puts on makeup before his class. (REUTERS, Willy Kurniawan)

The 38-year-old teacher calls himself a "sharia clown." Sharia is drawn from the teaching of the Koran. It is the law that governs Muslim daily life.

In an interview with the news agency MSN Hendrawan said, "There are many clowns out there. But I teach and motivate children to read the Koran. And who wouldn't want to read books cheerfully with a sharia clown!"

Hendrawan told Reuters news agency that when children are asked to recite the Koran, it is a bit difficult. "But if there are clowns," he explained, "they feel they go to the classroom with some purpose."

Hendrawan told MSN, "How can they read when they don't want to come? They must have a purpose. So, we try to get them to join first. We need to understand the children's world."

During the month of Ramadan, he rode to the school with his five-year-old son, Mirza. His son also dressed as a clown with big glasses and a big yellow and orange hairpiece. The father and son usually spent about an hour getting ready before meeting the children, including those from a community reading group.

It was not easy for Hendrawan to become the "sharia clown." His father did not accept his son's unusual methods for teaching the Koran. He told Hendrawan that he was an embarrassment.

Hendrawan's father has since passed away. And he still talks about his father's words as cutting into his heart.

"His behavior hurt me so much," said Hendrawan.

However, the founder of the school encouraged Hendrawan. He gave him confidence to pursue his dream of teaching as a clown.

Hendrawan now takes on part-time entertainment jobs. He makes sure to include religious values in his performances. He also shares the importance of reading and writing in his programs.

To teach a child to read, he said, they first must come to class. And if the lessons are fun, then they are they more likely to go. The important thing, Hendrawan said, "is that they want to go to school first and be happy."

His love of teaching and keeping children entertained has won him praise in the community.

A parent of one of the students said that "he helps children build an interest in reading, which will reduce the time they spend playing with phones" or other devices.

This, the parent adds, will have a great effect on their development.

Adi Kurniawan and Heru Asprihanto reported this story for Reuters from Indonesia. Anna Matteo adapted it for VOA Learning English. Hai Do was the editor.

recite – v. to read (something) out loud or say (something) from memory sometimes for an audience

orphanage – n. a place where children whose parents have died can live and be cared for : a home for orphans

motivate – v. to give (someone) a reason for doing something

embarrassment – n. the state of feeling foolish in front of others

encourage – v. to make (someone) more determined, hopeful, or confident

confidence – n. a feeling or belief that you can do something well or succeed at something