< India’s Elite Military Academy to Accept Women
Update Required To play the media you will need to either update your browser to a recent version or update your Flash plugin.
By Dan Novak
03 October 2021


For the first time, women in India can attend the country's top military college. The Supreme Court's ruling this month permits women to rise in the ranks of the world's second largest military. It marks a big step towards gender equality.

Lieutenant General H.S. Panag told VOA the ruling to let women attend India's National Defense Academy "is a good first step and something that had to happen given the fact that women are seeking more roles in the army all over the world."

The National Defense Academy is a difficult four-year program. Women have so far entered the military through a shorter 11-month training program. But the shorter program does not permit them to rise to higher ranks. It also mostly limits their career length to 14 years. 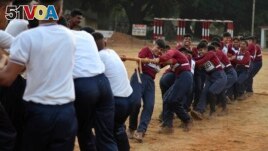 FILE - Indian army women recruits compete with men in a tug-of-war as part of their training before they are inducted as the first women soldiers below officer rank, during a media visit in Bengaluru, India.

In September, the Supreme Court ruled that women are now permitted to take the exams needed to enter the academy. Its ruling came after a public petition argued that barring women from the college violated the constitution, which prevents discrimination based on gender.

Women are a very small part of the 1.3 million people in India's military. They make up just over .5 percent of the army, 1.8 percent of the air force and 6.5 percent of the navy. Although women will be able to rise to the same ranks as males, combat roles for them in the army will be restricted.

During the Supreme Court hearing, the government argued there were many things that limit a woman's ability to serve in the army, like "motherhood, childcare, and psychological limitations."

Judges criticized the government for what they called a "regressive mindset" towards women in the military.

The Supreme Court has been critical of the army for being slow to permit women. Last year, a court ruling permitted women to hold non-combat command positions. The government had argued that women should not hold those positions because of their lower physical abilities.

Akanksha Khullar is a researcher with the Institute of Peace and Conflict Studies in New Delhi. She said, "Policy makers were resisting women's entry into military colleges because of a patriarchal mindset, that is why this has happened only after the court's intervention."

The move toward gender equality in the military could still take time. Women have worked in the armed forces mostly as doctors, nurses, engineers and lawyers.

Panag said that women who meet the same physical standards as men should be permitted to serve combat roles. Only a few countries, including Australia, Germany, Israel and the United States, let women fight in combat.

Some women who have served in the Indian army say that equality in combat roles will be a slow process.

Sajita Nair joined the army in 1994. She said she is happy that women will finally get a chance to attend the military academy. She said it will give women the chance to build a full career instead of leaving after 14 years, as many have had to do.

"This opens the way for them to get into senior positions," Nair told VOA. "We have such able women and they should be given the opportunity, and then of course, it is up to them to prove themselves."

Anjana Pasricha reported this story for Voice of America. Dan Novak adapted it for VOA Learning English. Ashly Thompson was the editor.

role — n. the part that someone has in a family, society, or other group

petition — n. a written document that people sign to show that they want a person or organization to do or change something

psychological — adj. a written document that people sign to show that they want a person or organization to do or change something

regressive — adj. returning to an earlier and usually worse or less developed condition or state

patriarchal — adj. cultures/societies that are controlled by men

intervene — v. to become involved in something (such as a conflict) in order to have an influence on what happens

standard — n. a level of quality, achievement, etc., that is considered acceptable or desirable